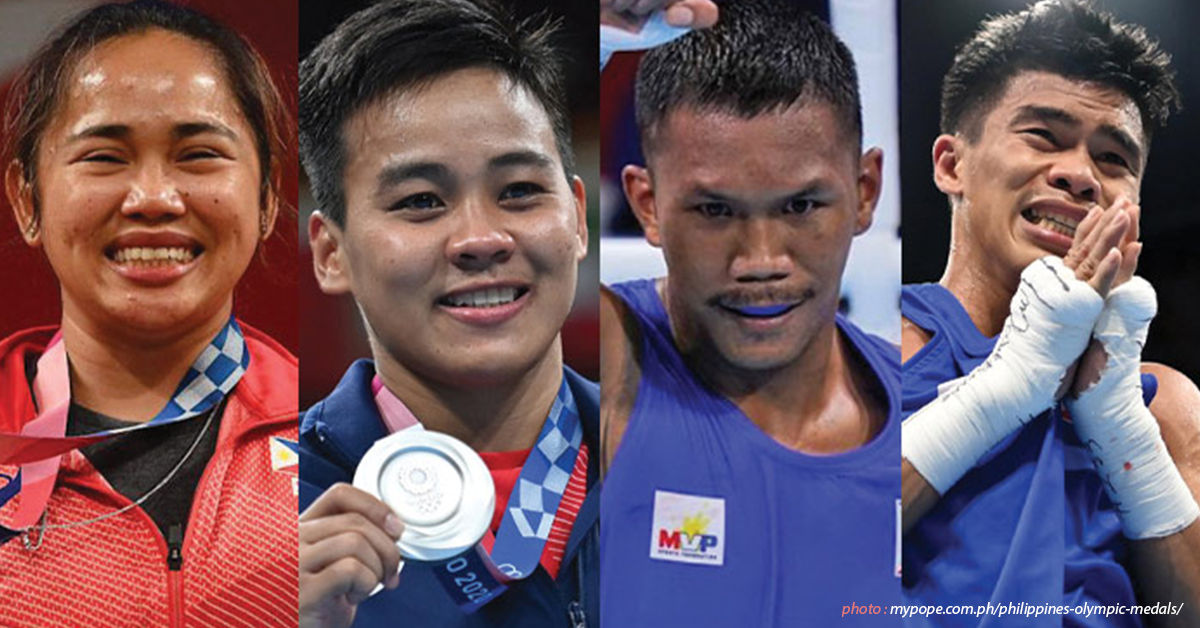 The Tokyo Olympics 2020 was finally held from July 23rd to August 8th. Originally, the Olympics were intended to be held from July 24th to August 9th of 2020 but had to be postponed as a result of the COVID-19 spread. Among the 11,656 athletes participating in 339 medal events in 33 sports, Filipinos have 19 athletes playing for and representing the Philippines. According to Rappler, 18 of the 19 delegates were rookie Olympians entering unfamiliar sporting territories and little to no fans cheering them on. However, in an article by Gov. ph, they’ve proven themselves to be noteworthy athletes this year bringing home medals, prizes, and the title of the top-performing country among Southeast Asian nations and 10th best Asian country.

Many are most familiar with the veteran weightlifting icon from Zamboanga City. Hidilyn Diaz was one of the only 3 Filipinos in history to win an Olympic silver medal in her campaign in the 2016 Rio Olympics. This year, competing in Women’s 55kg, she was the first athlete to ever win a gold medal in 97 years of Philippine history. She set an Olympic record of 127kg in the clean and jerk and another Olympic record for a total of 224kg.

Then, there is Nesthy Petecio, the first Filipina silver medalist in Boxing from Santa Cruz, Davao Del Sur. She was competing in Women’s featherweight. In 2019, she also ended the country’s seven-year gold medal drought similar to Diaz by being elected world champion in women’s boxing. Another silver medalist boxer is Carlo Paalam in Men’s flyweight from Cagayan de Oro. He won bronze at the 2018 Asian Games and Gold at the 2019 SEA games in front of his home audience. He even plans on entering the next Olympics in Paris.

Last but not least of the Olympic medalists is Eumir Marcial from Zamboanga City. He won Bronze in Men’s middleweight boxing and had the honor of being the country’s flag bearer in the opening ceremony. According to Rappler , it’s the most Olympic medal haul so far since the 1932 Los Angeles Games with bronze medalists – boxer Jose Villaneauva, swimmer Teofilo Yldefonso and high jumper Simeon Toribio.

While the other 15 participants were unable to obtain a medal, they performed very well in their own respective sports for the Philippines. Among the 15 is Elreen Ann Ando competing in women’s 64kg weightlifting. Hoping to follow in Hidilyn Diaz’s footsteps, the 22-year-old recorded 122kg in the clean and jerk, and 100kg in the snatch for a total of 222kg.

Another representative in Philippine boxing is Irish Magno, a boxer in Women’s flyweight. She is actually the first Filipina boxer to qualify for the Olympics with a strong start but she fell to Thai Jutamas Jitpong who previously lost to Magno in the 2019 Southeast Asian Games.  Another athlete is Carlos Yulo playing for Men’s individual all-around in artistic gymnastics. In the men’s vault final, He narrowly missed a podium finish with a score of 14.566 in his first attempt and a rebounded 14.866 in the second attempt which was the second-highest score among all other attempts.

Next, EJ Obiena competed in athletics men’s pole vault who is the first Filipino to qualify for the Olympics. He is a strong contender for the event since this year he’s already set the national outdoor pole vault record twice and has been training in Italy in preparation for the Olympics. He ended his campaign in 11th place at the Olympic stadium. He was unable to enter the top 10 after 3 attempts but being the only Asian in the final, he inspired the Filipinos with his determination and promised he would achieve his goals.

Another well-known athlete was Margielyn Didal playing for women’s street skateboarding. Even though she did not win a medal, she was always in a very positive mood which made her trending internationally. Sporting healthy sportsmanship, it is clear that she had a big love for skateboarding and had fun no matter the score.

Yuka Saso, playing in women’s golf, was the Filipino-Japanese key candidate for Japan’s first Olympic gold after winning the US Women’s Open in 2021. In the Tokyo Olympics, she managed a stunning performance finishing the tournament with a 10-under par 274 which was seven strokes away from the US gold medalist Nelly Korda. Another player for women’s golf was 23-year-old Bianca Pagdanganan who notched a joint seventh standing at the end of the Olympics opening round. She was not able to sustain her moment finishing the golf event and tallied one-over-par 285, but she said she is very grateful to represent the Philippines. And playing for men’s golf, Juvic Pagunsan is the oldest member of the Philippine delegation at 43 years old. However, his abilities are not limited to his age as the former Asian Tour top earner has been participating in the professional Japan Golf Tour as early as 2012.

Running for the Women’s 200m, Kristina Marie Knott plays for the Athletics event. She still holds the Philippine record of 23.01 which she set in 2019 in a regional biennial meet. But due to the Tokyo summer heat, she struggled and was given medical attention after nauseously crossing the finish line so she was unable to qualify for the semis after clocking 23.80 seconds to finish fifth and last in heat 7.

For swimming, Luke Gebbie competed in men’s 100m and 50m freestyle. While he failed to advance to the semi-finals of both the events finishing 39th in the 100m and 41st overall in the 50m, the Filipino-New Zealander maintains the Philippine record in the 100m freestyle with a time of 49.94 which he also established at the 2019 World Championships. Then, competing in women’s 100m and 200m butterfly is Remedy Alexis Rule. She finished at 15th place overall, clocked 2 minutes and 12.89 seconds in the second heat of her pet event in the semifinal.

Cris Nievarez competes in rowing men’s single sculls wrapping up his Olympic campaign at 23rd place overall in the competition. In the men’s single sculls, Nievarez was the only Southeast Asian qualifier but he missed his medal chance when he failed to advance to the semifinal.

In the shooting men’s 10m air rifle competition, Jayson Valdez has been aspiring to compete in the Olympics since he was a child and he’s the first Filipino to compete in Olympic shooting. He placed 44th out of 47 in the rifle qualification round. The Filipino shooter averaged 102.1 points and tallied a total of 623.6 points in the six rounds where athletes have to shoot 60 shots in 75 minutes.

In the martial arts, there is Kiyomi Watanabe in women’s 63kg judo and Kurt Barbosa in men’s 58kg taekwondo. Watanabe, with four straight SEA Games golds, served as the country’s flag bearer alongside boxer Marcial. She ranked No. 41 but unfortunately, was knocked out in the first 38 seconds of the round of 32 in the quadrennial meet to Cabana Perez. 3 days before Watanabe, Barbosa, with local and international competing experience, was set to compete in the taekwondo tournament. He opened his campaign with a 26-6 loss to No. 1 seed Jang Jun of South Korea. He bowed out of the Tokyo Olympics and was the first Filipino to do so.

Considering the athletes’ outstanding performance and commendable efforts in this year’s Olympics, they were praised and rewarded greatly. Sources from CNN Philippines states that ending the gold medal drought, Hidilyn Diaz received at least ₱43.5 million cash, a house and lot in Zamboanga from President Duterte, a house and lot in Tagaytay from the Philippine Olympic Committee President Bambol Tolentino, and a lifetime of flights and fuel. She was promoted to staff sergeant at the Philippine Air Force and will be awarded a Presidential Medal of Merit.

In addition, Rappler says that Nesthy Petecio fulfilled her promise to bring financial blessings to her family in her run in the Tokyo Games as she has been promised ₱24 million in cash, free flights, and residential properties.

Along with the athlete’s bonuses and gifts, the Chief Presidential Legal Counsel commends the athletes, with or without a medal, for “performing credibly” in representing the country through sports. He says that not only have they inspired the new generation of athletes to follow in their footsteps but they have made us proud as a nation. He also thanks to the sports officials who made sure that the athletes and preparations in the competition were “well taken care of.”

The Future of Filipino Athletes

Hopefully, more talented and aspiring Filipino athletes will be more encouraged to join the next 2024 Summer Olympics to be held in Paris, Italy, and even the next Winter Olympics in Beijing, China. Especially since according to Rappler, resources in sports are going to be invested in by willing private sectors. After all, it was the lack of financial aid for travel, allowances, and training that resulted in less qualified competing athletes. Perhaps there will be a bigger difference in competition if the future athletes will be more provided.