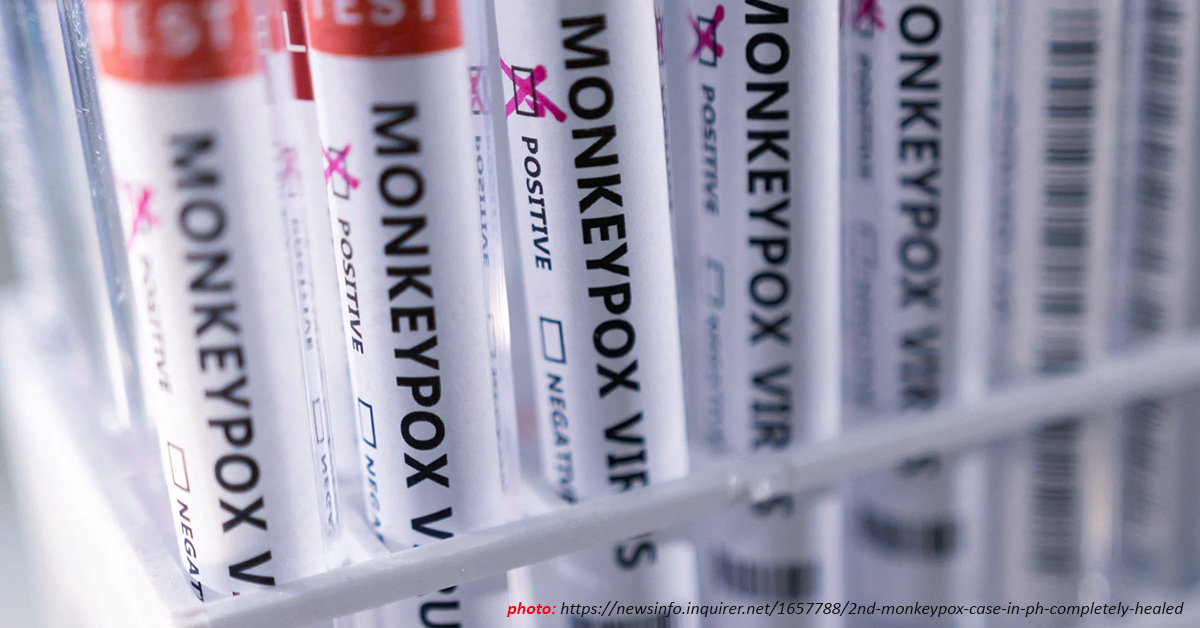 On the 29th of July 2022, Department of Health (DOH) assistant spokesperson Beverly Ho announced during the Malacañang press briefing that they detected the first case of Monkeypox in the Philippines. A 31-year-old Filipino arrived in the country back on July 19 and had a travel history to countries with monkeypox cases. The case was confirmed positive by testing using RT-PCR at DOH Research Institute for Tropical Medicine. The patient has been discharged and relieved from isolation since August 6, 2022, as well as close contact with the patient.

The second and third cases of monkeypox were identified on August 18 and 19, both patients had recent travel history to countries with documented monkeypox cases. The 34-year-old Filipino had no close contacts while the 29-year-old Filipino had seventeen close contacts and contact tracing is ongoing. However, the fourth monkeypox case in Iloilo is of a 25-year-old who has no history of traveling to countries with monkeypox cases. The patient is currently in an isolation facility. Fourteen close contacts were recorded, and six contacts are undergoing quarantine while one is taking care of the patient with complete personal protection equipment and is currently self-monitoring.

In response to the Negros Occidental’s local government plan to tighten the regulations of seaports, DOH does not recommend a lockdown due to monkeypox as the cases are being monitored and the patients, as well as the close contacts, are under strict monitoring and isolation. Preventive measures are being done to avoid any further transmissions of the virus.

“For now, we cannot still confirm that local transmission is present,” DOH said.

The three cases were all travel-related and the fourth case had no travel history. All three are unrelated to each other.

Iloilo Governor Arthur Defensor Jr signed Executive Order 374 for preventative measures against monkeypox on Wednesday, August 24, 2022. It includes the public health standards, along with surveillance, screening, management, and control by the Barangay Health Emergency Response Teams, strict quarantine procedures, the creation of Provincial Contact Tracing for Monkeypox, and the implementation of the Project Program for Resilience in Ilonggos in Mind and Emotion.

“Ang incubation period niya is from five (5) to 21 days. Ang pinaka-first symptoms niya is fever and swelling of lymph nodes. Some of the patients also with monkeypox naga manifest sila ug headache, chills, sore throat, kakapoy sa lawas, and fatigue” she said in an interview on Davao City Disaster Radio.

DOH has already prepared a response against the monkeypox outbreak in line with the standards of the World Health Organization (WHO) and has been preparing since the rise of monkeypox cases in other countries.

Monkeypox is a virus that is in the same family as the smallpox virus. They have both similar symptoms but monkeypox is milder and rarely fatal. It is most common in African rodents and primates such as monkeys. Most cases are from central and western African countries and outside of that, other cases were from countries that have imported animals. This virus can spread to anyone through close or skin-to-skin contact with a person who is infected; this includes direct skin contact and touching of objects that have been used by a person with a monkeypox.

It is recommended that people should avoid skin-to-skin contact with people that have a rash, avoid using objects that were used by someone with monkeypox, and to always wash their hands.