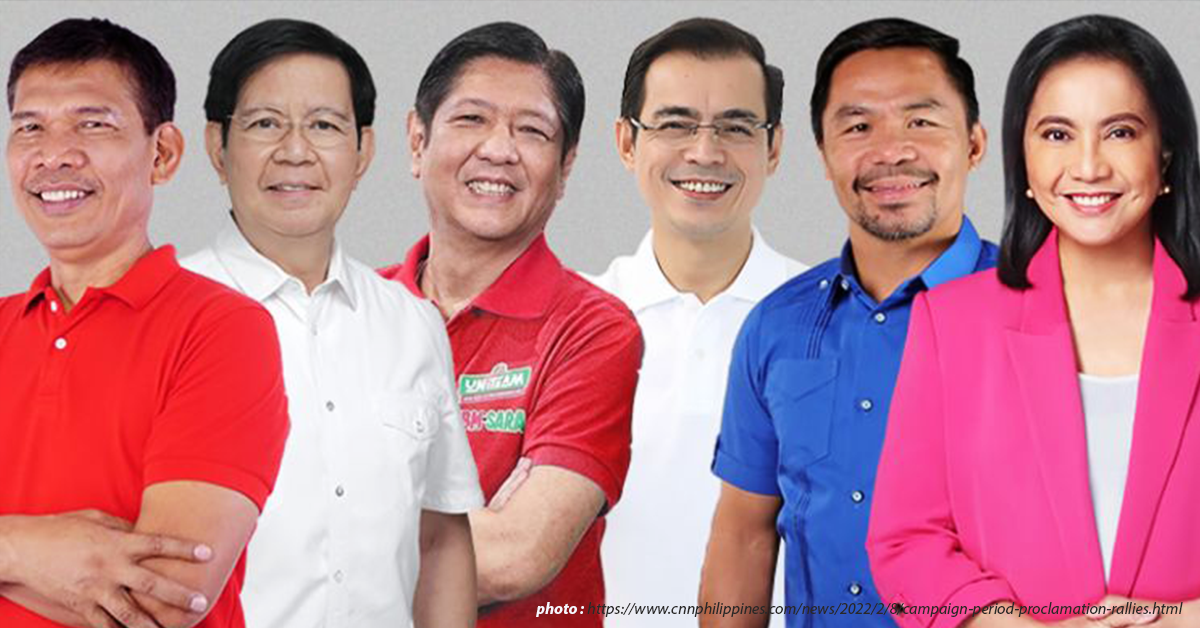 I remember on the second week of January 2022 about an incident that happened as I was coming back to Davao city after spending a last-minute vacation in my province. This incident stirred a lot of emotions. People were angry, agitated, hungry, and irritated. As I was riding my motorcycle back to the city, a huge traffic stopped me on my tracks. The traffic was stretched out from Toril to Ulas, Davao City. The reason for this was because of a checkpoint made to establish the prohibition on carrying and usage of firearms. At the back of my head, I was like “The elections are coming, whether I like it or not- and I am not really liking this.” —I only meant the long stretch of traffic. Luckily, I was on a motorcycle, so sneaking into narrow gaps was not a problem. Officially, that was the start of election activities.

This month, February 8, 2022, the campaign period for nationally elected positions will start. People will now see campaign ads wherever and whenever. Be it on the TV, radio, social media (Facebook, Twitter, Instagram), video sharing services like YouTube, and wherever is applicable. Outside, people will also see posters, slogans, banners, and even billboards of running candidates with their catchphrases and taglines. This is not new to us, Filipinos. Whenever an election (local or national) comes, one would really expect that candidates and their supporters would abuse and spam advertisements wherever and whenever they can. It is also expected that flyers and leaflets are scattered like trash in the streets, creeks, and canals. Talk about being wasteful and insensitive to the environment.

The looming issue, I would say, however, is this: why do Filipinos revere and glorify these politicians running for office?

Exhibit A: Two groups of two different presidential supporters threw flyers at each other just because.

Exhibit B: A debate between two groups of different supporters (more like fanatics) that’s just full of ad hominem (attacking a person, a fallacy).

These cases are not isolated. It happened to most of my friends, my family, and even my students. People have unfriended and cut their ties to their family, friends, and organizations just because of an opposing political view. That is terribly sad to say the least.

In an article by Shawn Patti last 2020 entitled ’The Concerning Cult-Like Worship of Politicians’ , it was stated that race, gender, and religion are inferior identifiers compared to political affiliations. This means that regardless if you are a Tagalog, a Bisaya, or an Ilonggo, once you have chosen your candidate, your ethnicity will not define you. Regardless if you are a straight, bisexual, or a member of the LGBT, your candidate is your candidate. However, I would  disagree with the religion matter. In the Philippines, especially in cult-like religions, whatever your leader says, you do. Voting is not an exception. For the dominant Roman Catholic church here, I would say it is somehow divided. There are priests involved in the campaigning of politicians. Though it is not against their beliefs, in the Philippine constitution, it is wrong. There should always be a separation of the church and state, but not of the people.

So how do we prevent this from ever happening to us, as educated people who will enlighten others?

With that, I rest my case.