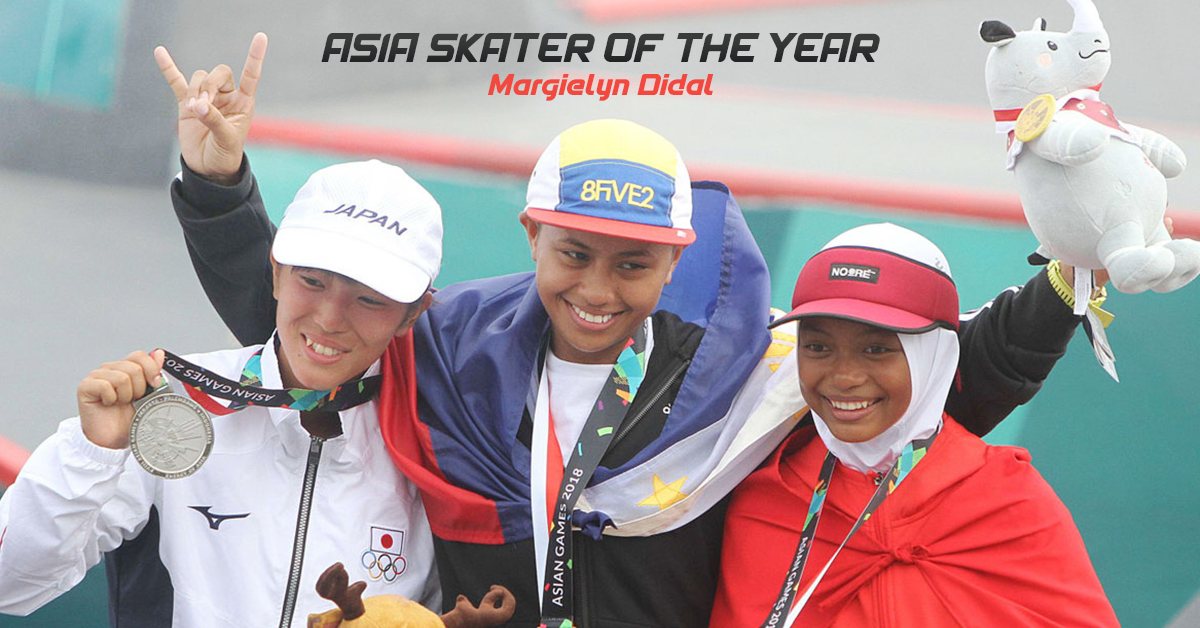 Margielyn Didal from Cebu wins the Asia Skater of the Year Award after being nominated for the 2020 Asia Skateboarding Awards title.

Specifically, Didal was named the top inaugural award of Women’s Asia Skater of the Year after defeating seven other nominees. The reigning Southeast Asian and Asian champion, at an early age of 21, already won three gold medals from the Southeast Asian and Asian Games and was even named one of the 25 most influential teens of 2018 by TIME Magazine. Besides winning $1500 for the award, Didal also received another $300 for winning the Style for Miles and Fastest Feet in the East awards. Didal, which is currently ranked 14th globally, is an Olympic qualifier. However, the pandemic led to the postponement of the Olympic qualifying round supposed to be held in Peru this month of March.

Despite this, Didal strived to continue practicing amidst the community lockdown by riding in the makeshift skate spots inside her house. She took advantage of any available means to get on her skateboard, which included her house itself. By doing so and by filming herself, allowed her to compete in various online competitions. Her coach Dani Bautista stated that it only takes a little effort to motivate Didal as she has so much energy to offer. Her coach also added that it would be ideal for her to participate in an actual competition like the Olympic qualifier, a high-level event, not just because of her need to have more chances of winning in the up-and-coming Tokyo 2020 Games.

Looking back, Didal started skateboarding at the age of 12 and loved it on the spot. What started as a hobby soon became a way for her to help her family as she realized that she could start doing so at a young age. Being the daughter of a carpenter and a street vendor, Didal persevered and continues to do so by lifting her family out of poverty. Having a big family with five other siblings also motivated Didal to help her parents. Didal then became the family’s breadwinner with her competition earnings and even sponsors lining up to represent her.

Moreover, Didal still cannot internalize representing her country, the Philippines, and raise the Philippine flag at the Olympics. She considers the Olympics and participating in it as an immense pressure as she knows that it is for her country. Besides the abovementioned awards, she also won a bronze medal in the first-ever Women’s 2020 Tampa Pro Competition and is the first Filipino ever to participate in international skateboarding events like Street League Skateboarding in London and X Games in Minneapolis. Living a life similar to a fairy tale, from skateboarding on the streets to skateboarding at the Olympics, influenced her hometown, Cebu City, to support skateboarding not just as a sport but also as a career for future athletes. As Margielyn Didal herself mentioned, skateboarding is not for fame as it is about the vibe of doing the same passion. She wants respect, not just for skateboarding, but for whatever status in life, including the kids in the street and the street vendors.