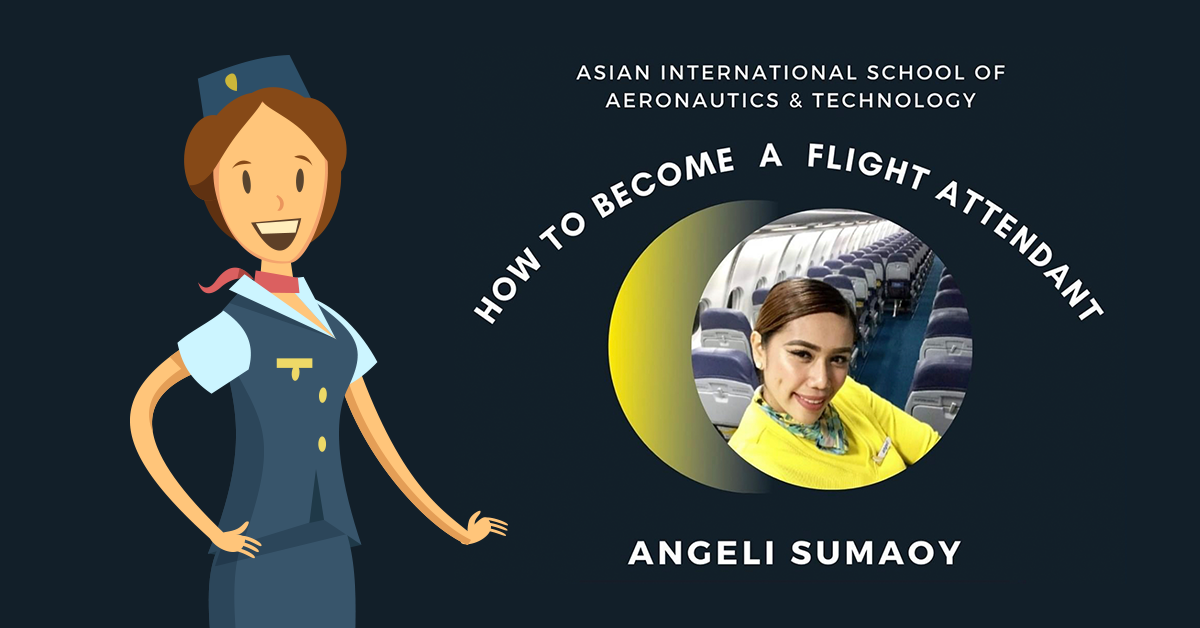 On February 11, 2021, a webinar on how to become a flight attendant was conducted by the Asian International School of Aeronautics and Technology (AISAT) for those who plan, who aspire, and who like to know more about flight attendants, especially the students enrolled in the school. Ms. Angeli Sumaoy-Tamisin, a flight attendant and an instructor in BS Aviation Management was the speaker of the webinar.

Ms. Angeli shared first her story about how she became a flight attendant. It was when her friend insisted she apply for the flight attendant opening. She doesn’t want to pursue it but was encouraged because she wants to support her friend in doing so and vice-versa. When she walked into the hotel where the application is held, it was like a beauty pageant as she saw the applicants were gorgeous and tall. She said that the process was still clear to her as they ask her to smile, measure her height, check her skin, and even her armpit. If the applicant made it from the first level, the next stage will be a panel interview. As Ms. Angeli went on to impart her experience, she said that the questions were tough just like in a beauty contest.

Once hired as a flight attendant, Arline companies will offer initial training. Training in becoming a flight attendant varies from one Airline Company to another. Some companies would train aspirants in a month up to two months, and some would require two to three months of training. Training will take place in the Airline Operations Training Center and is required by the Civil Aviation Authority of the Philippines (CAAP) for International Air Transport Association (IATA) compliance. Training includes flight regulations, company operations, and job duties. The training is tough and challenging due to the standards. When you undergo exams for evaluation, there should be no mistakes in your answers. Trainees will only have a maximum of three lifelines to pass on becoming a flight attendant. Practical and emergency training are also included to exercise real-life scenarios and learn to think actively in case of extremity. Hence, training is difficult yet so worth it when you qualify to be a flight attendant. As Ms. Angeli said, “flight attendants do not only have beauty and body but definitely we all have brains that made us to where we are right now”. Safety is a must and should be memorized by heart.

As flight attendants, they work in different seasons and different time zones. Being a flight attendant does not have a definite schedule. They have a so-called field reserve duty that they will stay in their office for about six to eight hours of duty in case that a colleague will not make it in their scheduled flight due to reasons as such accidents or emergencies. Also, on a home standby basis in which they are on an on-call duty just like doctors do. Being a flight attendant has its advantages like experiencing four seasons (winter, summer, fall, and autumn), they can get together with their friends or relatives in other countries, no routine schedule that sometimes they can have lunch in Japan or have dinner in Dubai, especially travel to countries you haven’t been to. According to Ms. Angeli, what she loves the most in her job as a flight attendant is that she can wear her “smile and hospitality” towards her passengers. However, in this kind of setting in which they do not have a definite schedule, they may celebrate birthdays and special occasions away from their loved ones. Flights can also be stressful as they have to be prepared in any circumstances that may happen suddenly, and that would also they have to remember all the learnings and procedures they must do as such emergency, irate passengers, medical situations, etc. Immediate decision-making is one of the most important things that a flight attendant must-have for the safeness of all the passengers. Dealing with different nationalities is one of the difficult parts of this type of career as they may encounter several cultures and different personalities of their passengers at hand. Demanding and irate passengers are also challenging parts of being a flight attendant. Lack of time is a downside as well, especially when their schedule is tight and they have to fly from one country to the other in a limited time. Due to this, different countries have their own time zones and seasons which would compromise their health. For example, when they have to fly from Japan in the snowy winter season and land in Australia in the scorching heat of summer. Their immunity is challenged as well as their body to adapt in each environment of different counties they will fly to and from. Ms. Angeli also shared how COVID-19 affected the airline she worked with and the protocols they do. As they have procedures as compliance with the new normal such as wearing masks and face shields, it also affected their health as their body has to adapt with new protocols. Many were also allowed many kinds of part-time job just to provide for the needs of their family as well as their self.

As Ms. Angeli closes her speech, she wanted to know the journey of aspiring flight attendants and asked:

“Do you have what it takes to become a flight attendant?”

She then compared the aspirants to a butterfly undergoing metamorphosis. From a cocoon in which they have nothing yet and need to learn things, to a caterpillar in which they have to grow slowly, and to become a butterfly that is ready to fly and show the world what they are made of. She also shared on fear about failure and rejection and that it is normal so we have to go through the process at every stage and prepare ourselves.

“Don’t let your dreams get lockdown. Always believe in yourself….just do what is necessary and what’s possible and suddenly you will be doing the impossible.” – Ms. Angeli Sumaoy-Tamisin