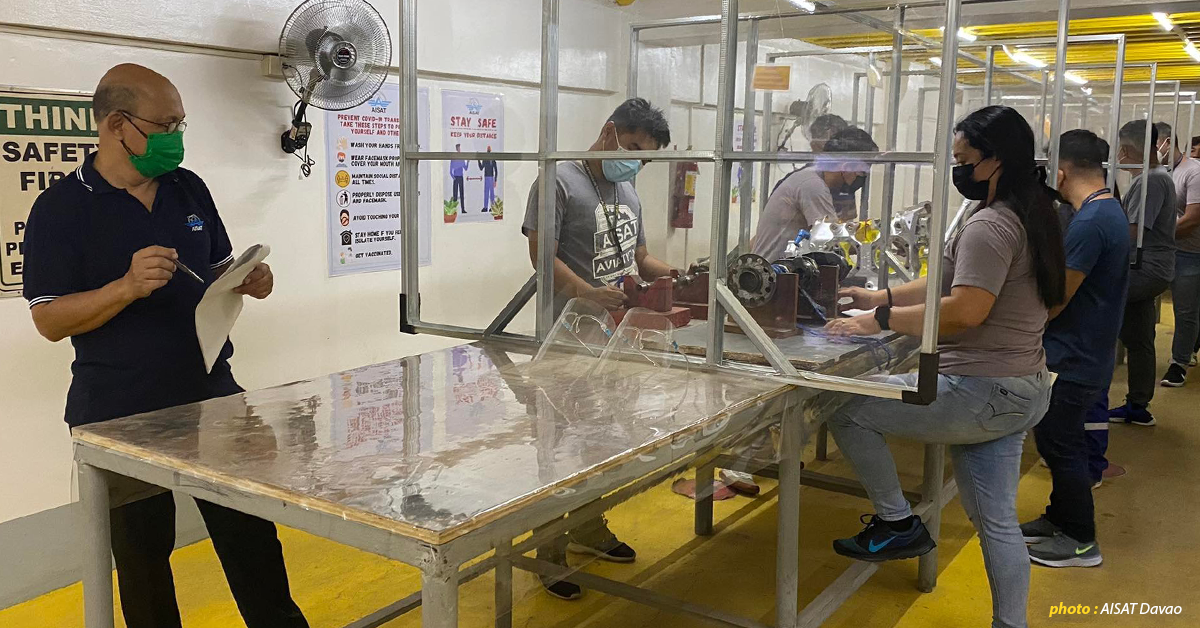 In response to Davao City being placed under Alert Level 1, the lowest restrictive alert level classification, AISAT catered its first batch of laboratory students from the aviation department on March 7, 2022. The graduating batch of the BS Aircraft Maintenance Technology and BS Aviation Electronics Technology programs were the first to have their laboratory sessions in compliance with the requirements of the Civil Aviation Authority of the Philippines. Specifically, they will need to get their licenses and special order applications that require them to have their laboratory units completed. Also, AISAT ‘s facilities were already all set and aligned according to the standards that were given by the Commission on Higher Education and the Inter-Agency Task Force as early as November 2021. For more information on the setup of AISAT’s face-to-face laboratory sessions, also read: http://aisat.edu.ph/altitude_articles/aisat-advances-facilities-strategizes-for-in-person-laboratory-sessions/

The succeeding batches of laboratory students are also scheduled for the following months and for those who have not yet signed up, a reminder was posted stating to wait for the opening of the third batch which will commence once the first batch of laboratory students have started. A virtual conference on AISAT’s plans for its face-to-face laboratory sessions was also held last November 14, 2021 which invited all of its stakeholders to seek for suggestions on the improvement of its setup. A recording of the discussion was made available to public and can be accessed via AISAT Davao’s YouTube channel link:

In addition, AISAT’s graduation committee has agreed to hold the graduation of batch 2021-2022 in an actual face-to-face manner. It was decided that the venue will be at the AISAT gym and there may be a need to divide the ceremony to ensure that protocols are followed especially as the school expected to have more than 200 graduates this school year. The tentative dates for the graduation ceremony are June 3 and 4, 2022 for the divided ceremony, and June 3, 2022 for the combined ceremony if the situation would allow. Though unlikely to happen, if the government imposes restrictions again, there is a need to do the graduation ceremony online. The low chance is due to the continuous decrease in the number of cases as well as the consistent vaccination rollout placing the current status at 85.93 percent for first doses and 84 percent for second doses of 80 percent of the city’s total population.