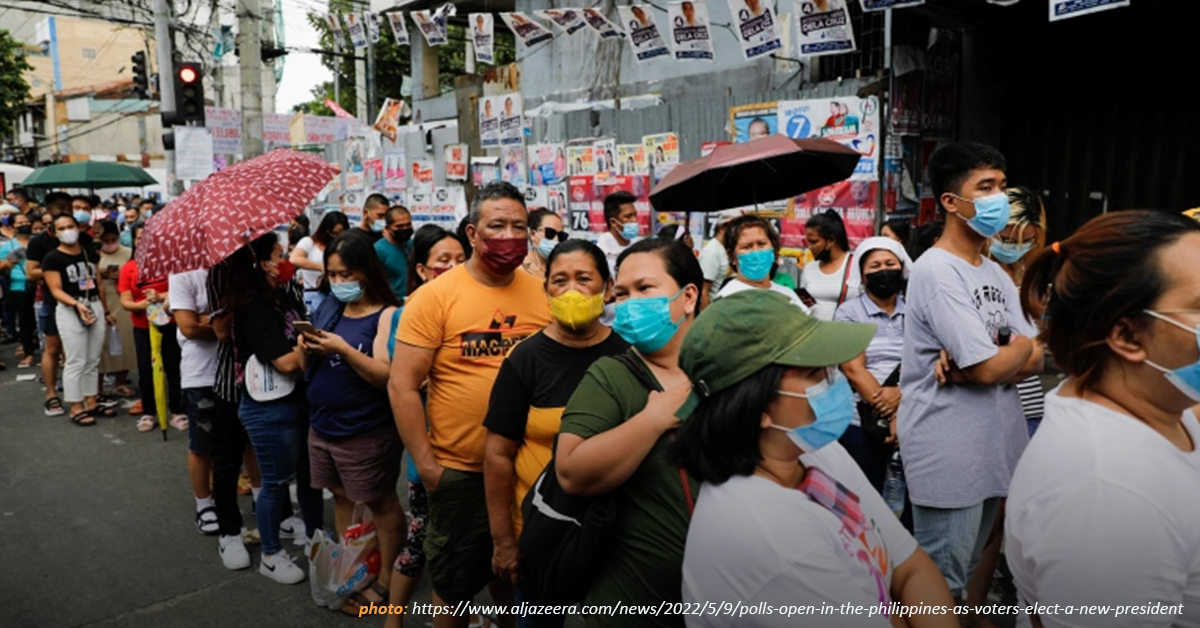 The 2022 PH Election Day was held on a Monday of May 9, 2022. Rappler mentioned that the number of registered voters is over 67 million with at least 64% of the Philippine population vaccinated. 65.7 million are domestic voters and 1.8 million are overseas voters as recorded in the poll body on December 14. The county is said to hold one of the largest elections in Asia. According to The COMELEC, this historic number in registrations make it clear that Filipinos are determined to exercise their right to vote. Millions of voters across the country made their way to 106,174 precincts and casted ballots at 37,141 voting centers. Filipinos will be choosing not only a new president but also a new vice president, members of congress, governors and other local politicians like councilors and mayors. Counting is done immediately after the votes were transmitted and the inauguration is set to be held in June.

Voters make their way to polling precinct to make and submit their votes. The venues for the polling precinct became an opportunity to create “memes” to cope with the election agitation. Many jested about face-to-face classes as it has been over 2 years since there were full physical classes and voters were situated in the familiar classrooms and school gyms, as mentioned by Interaksyon.

One expert mentioned in an article by the Diplomat in March, that the campaign period is looking like a “public health nightmare.” Other countries have held elections during the pandemic. So, it is possible that Filipinos can have a safe election but extra caution must be observed. With the fears of the pandemic still present, good governance will be the solution. Thus, the elections must go on, according to Dr. Albert Domingo. Sociologist and director of development studies at the Ateneo de Manila University, Jayeel Cornelio, says that whoever wins must and will become the crisis leaders. The safe conducting of elections is doable but making sure that participants will be given a chance to vote safely may be a challenge according to experts. Domingo emphasizes the importance of well-ventilated areas, accommodations for those vulnerable like senior citizens or those with disabilities, and etc. COMELEC Commissioner Marlon Casquejo said that the voting would start at 6 am and finish at 7pm. However, if there are still voters remaining to vote or outside the polling place, they will wait and continue with the voting. Back in November 2021, this is what Casquejo said to the House Committee on suffrage and electoral reforms.

Violence is a common theme in the Philippines during elections. The government has deployed 270,000 police and military personnel for Election Day. As discussed in The New York Times, there have been reports of violence and broken voting machines. On Sunday, there was a shooting between two groups that killed 4 people and a grenade that left 9 others wounded in the northern province of Ilocos Sur. In the southern town of Maguindanao in a municipal hall, after 5 rounds of grenades, there was an exchange of gunfire with the police. While in Lanao del Sur, people stormed voting centers to destroy ballots and machines as seen on videos on social media.

There was also an issue regarding defective machines. According to Casquejo, the counted 143 defective machines were mostly a fault of old equipment or “isolated incidents.” COMELEC Commissioner George Garcia revealed that 1,800 of the machines were found to be malfunctioning but there were 1,100 backup machines across the country. In addition, voters were packed so it was difficult for many officials to enforce social distancing.

According to GOV.PH, there are 3 Lanao del Sur towns where “failure of elections” was declared by the Comelec. These municipalities were Tuburan, Binidayan, and Butig. Vote counting machines and ballots were taken away by unidentified men in the municipality of Butig. InTuburan, some supporters blocked the entrance for the teachers carrying the ballots while two other supporters were the leaders in destroying the vote-counting machines in Binidayan Town. Special elections were set to be conducted on May 12 for the total of 14 villages in Lanao del Sur.

Other than the vote counting machine issues, vote-buying, reports of violence, and some difficulty in social distancing, Filipino voters experienced a “peaceful election” in general compared to previous elections, according to Garcia. In his comparison, he said it is the most peaceful somehow regarding the violence and terrorism.

Many anxiously watched and waited for the vote count with Marcos in the lead with 31.6 million votes which is 58.8% more than the rest of the competitors, including his main rival, Vice President Leni Robredo. Protests were made for the recount of votes because of the suspicions raised seeing a consistent pattern of 47% ratio in votes. Numerous protests were held including a protest held by priest Robert Reyes in front of the COMELEC headquarters in Intramuros in an article by Manila Times a day after the election. Other protests were held, such as, a march and rally coming from Dr. José Rizal Park going to Hing Hay Park in an article on South Seattle Emerald a few days after the election.

After a recount of the votes, Marcos still appears to be in the lead. As a result of the elections, on May 25, 2022, he was officially declared President-elect along with Sara Duterte as his Vice President.