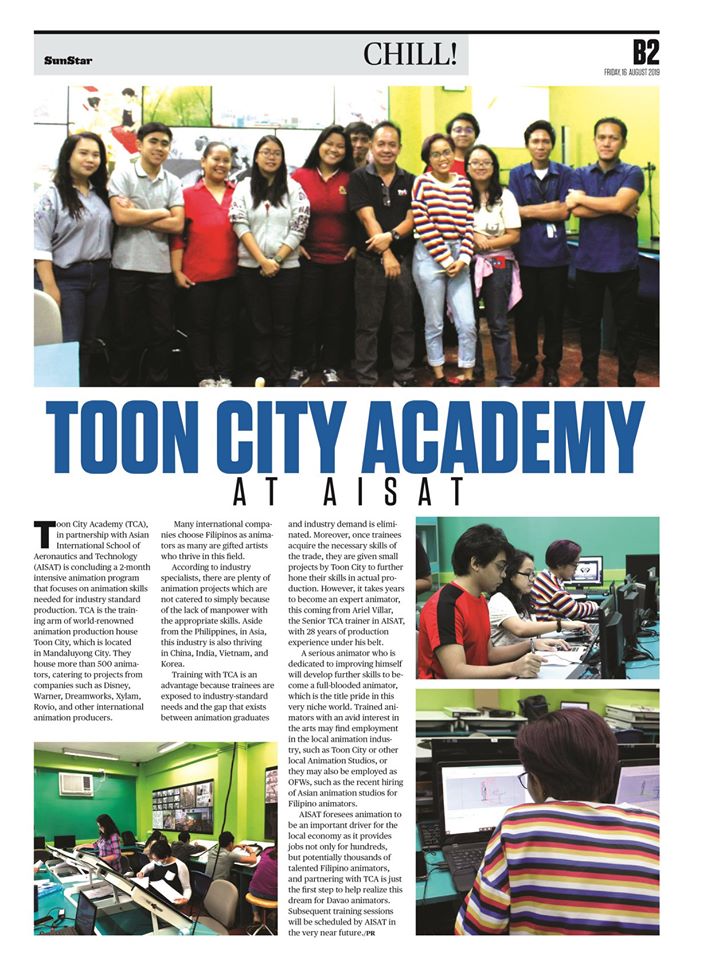 Toon City Academy (TCA), in partnership with Asian International School of Aeronautics and Technology (AISAT) is concluding a 2-month intensive animation program that focuses on animation skills needed for industry standard production. TCA is affiliated with world-renowned animation production house Toon City, which is located in Mandaluyong City, housing more than a thousand animators, catering to projects from companies such as Disney, Warner, Dreamworks, and other international animation producers. Many international companies choose Filipinos as animators as many are gifted artists who thrive in this field. According to industry specialists, there are plenty of animation projects which are not catered to simply because of the lack of manpower with the appropriate skills. Aside from the Philippines, in Asia, this industry is also thriving in China, India, Vietnam, and Korea.

Training with TCA is an advantage because trainees are exposed to industry-standard needs and the gap that exists between animation graduates and industry demand is eliminated. Moreover, once trainees acquire the necessary skills of the trade, they are given small projects by Toon City to further hone their skills in actual production.  However, it takes years to become an expert animator, this coming from Ariel Villar, the TCA trainer in AISAT, with 28 years of production experience under his belt. A serious animator who is dedicated to improving himself will develop further skills to become a full-blooded animator, which is the title pride in this very niche world.

Trained animators with an avid interest in the arts may find employment in the local animation industry, such as Toon City or other local Animation Studios, or they may also be employed as OFWs, such as the recent hiring of Asian animation studios for Filipino animators. AISAT foresees animation to be an important driver for the local economy as it provides jobs not only for hundreds, but potentially thousands of talented Filipino animators, and partnering with TCA is just the first step to help realize this dream for Davao animators. Subsequent training sessions will be scheduled by AISAT in the near future.