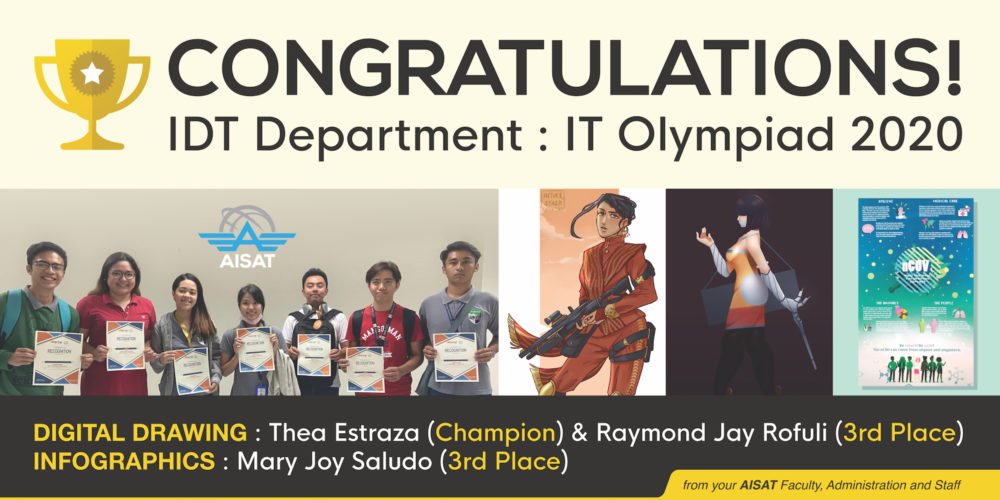 Last February 11, 2020, the annual PSITE – IT Olympiad was held at the Ateneo de Davao University. It was a day of friendly competition and well-earned victories for all the talented ITE students from all over the region. This of course, included our very own AISAT IDT Department.

For weeks, the chosen representatives of our school have prepared and trained with their coaches for their respective events. Their calendars were marked and the day of the competition grew closer and closer. When the day finally arrived, the IDT  students were brimming with excitement and a bit of trepidation.

The day started early in the morning with three note-worthy events for the participating schools. First was the IT Quiz Bowl that served to test the student’s wits and knowledge on the world of Information Technology. Our representatives, Roquen Kirk Coscos and Gem Joy Catedrilla, accompanied by their lovely coach Ms. Annah Thalia Cabante poured over the increasingly difficult questions with their all. Though they didn’t come home with medals that day, they came home with the burning resolve to bring in the first place medals the next year.

The Motion Graphics competition was represented by Sir Ryan Delfin as the coach and Jude Ionn Magalan as his promising prodigy. Jude showcased his skills with the video editing program Aftereffects and created an entertaining motion graphic aimed to inform us more about the ever relevant but hazardous phenomena of the Novel Corona Virus outbreak.

On the other hand, the Digital Drawing event was spearheaded by Sir Freddie Rodriquez Jr.’s team consisting of Raymond Jay Rofuli and Thea Estraza. With the given theme of “Culture Mash-Up: PH Tribes + Modern Soldier”, the two showcased their talent in character designing against their formidable fellow contestants. The two participants were able to finish in under the two hour mark that was given for the task, both satisfied with their creations.

Later that afternoon, our very own Ms. AISAT 2019, Mary Joy Saludo, tested her prowess in Infographics with her partner, Marc Steven Vegafria. Their skillful coach, Ms. Leslei Kaye Lodia, was their best supporter as they toughed out through their time limit to create a unique and informative design that also teaches us about the Novel Corona Virus outbreak and all of the things that we should know about it in relevance to our health and safety.

The day ended with all smiles for our group of students and teachers as the closing and awarding program commenced. We even got a rather entertaining bit from our Ms. AISAT as she gave the crowd a little tease of her talent as a singer and dancer.

It was however, the awarding of winners that was truly the highlight of the day. The AISAT IDT Department came home with three medals to be proud of. Proving once more that she’s both beauty and brains, Mary Joy Saludo snags the 3rd Place in the Infographics event. In the Digital Drawing event, the students surprised us with not just one but two medals! Raymond Jay Rofuli earns the 3rd Place with his amazingly rendered digital art piece while Thea Estraza was named the Champion for her tribal soldier character design. All the unexpected surprises and the splendid performances of all participants of our school truly seized the day and made them come out on top. They showed us the promising future of their department and of course, their beloved AISAT, where dreams really does take flight.