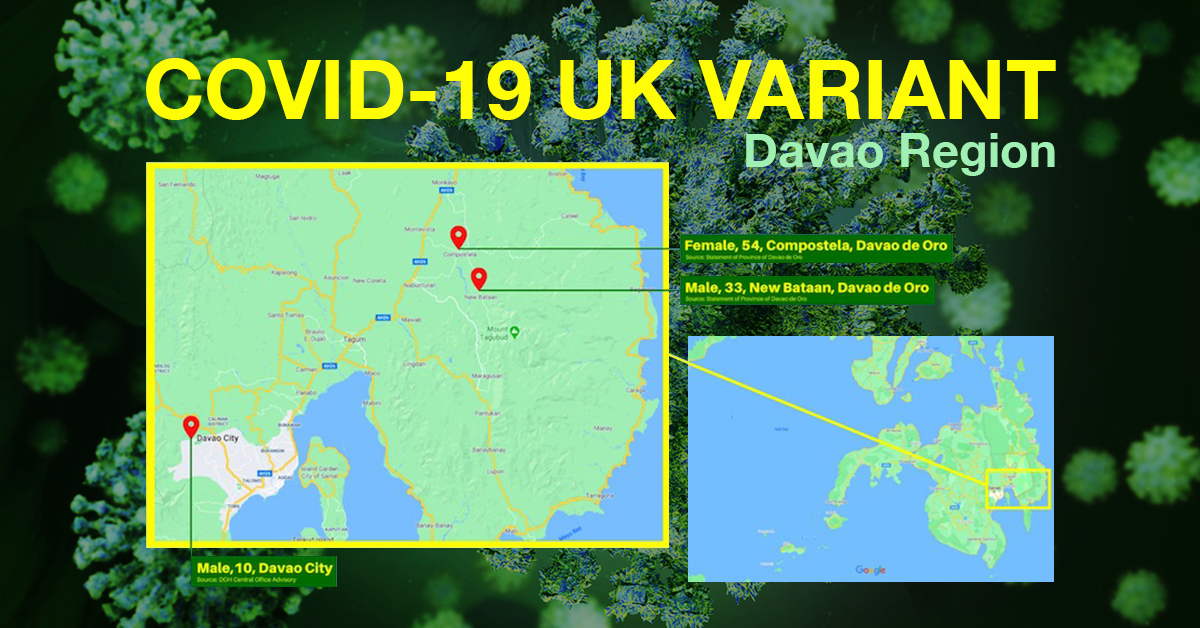 The Covid-19 UK variant is a new type of mutation of SARS-Cov-2, which spreads more quickly but is not as deadly as the original. The Philippine government tries its best to detect this variant through genome sequencing and also to find other new variants. The B.1.1.7 or also called the Covid-19 UK variant was first detected in the Philippines in January 2021. It has recently spread in Davao Region. On Feb 12, 2021, DOH announced 19 additional cases of the new variant which brings the total number of patients to 44. These cases were part of the sixth batch of genome sequencing by the PGC on February 8.

On Saturday, February 13, 2021, 2/3 of COVID patients from the Davao Region are infected with the COVID UK variant. The patients are identified as 33 years old male from Compostela, Davao de Oro, and 54 years old female from New Bataan, Davao de Oro. The Emergency Operation Command has reported that the female patient is in a home quarantine but was advised by DOH Davao to return to New Bataan. The male patient is in a quarantine facility for more than 21 days after he tested positive on the new strain. Both of the cases have no travel history and are not ROFs (returning overseas Filipino). The provincial government has announced that they will be doubling their efforts in tracing close contacts of the patients and detecting this new variant. As of February 17, both patients are asymptomatic.

The provincial government of Davao de Oro has now tested over 300 people after the two patients with the UK variant of COVID. There will be more people who will be swabbed in the upcoming days. There will be no implementations of lockdown but people should adhere to minimum health protocols.

On the same day of February 13, 2021, The DOH said that there was no sufficient evidence of community transmission of the UK variant in the Philippines. Further study is required to determine the amount of transmission within the country. However, on February 16, Davao City Health Office confirmed the new variant case in the city. A 10-year-old male with mild symptoms in Davao City. The patient was tested positive on January 18 and was isolated for 10 days. They have no history of travel in or out of the city. The parents have been tested and the results were negative.

“…What is most important is for the public to continue adhering to minimum public health standards,” – DOH Undersecretary Maria Rosario Vergerie said.

Samples from Southern Philippines Medical Center (SPMC) and Davao One World Diagnostic Center have been sent to PGC in Manila for genome sequencing; however, results cannot be sent back yet because of technical problems. The UK variant is a cause of concern while also the new variant from Sabah, Malaysia is also making the city on high alert as Davao Region is its closest neighbor.

Davao CHO advises people to remain vigilant against the virus and to always observe health protocols.