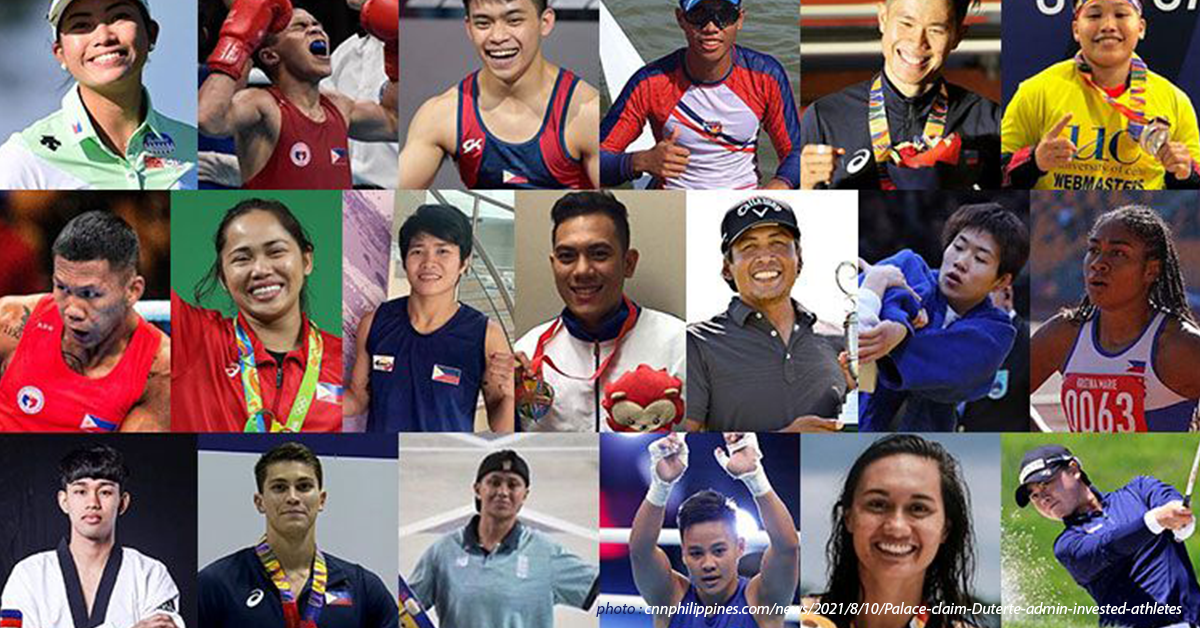 Filipinos in every corner really value sports- be it basketball, volleyball, and even conventional boxing. It is ingrained in these people the need to be active, sporty, and competitive. Just recently, the 2020 Tokyo Olympics concluded and gave the Philippines four medals in recognition- One gold, two silver, and one bronze. This just shows that Filipinos have what it takes to showcase what they can on the world stage.

Filipino athletes start cultivating their skills in school intramurals, then city meets- followed by regional meets, and ultimately in the national level. During these times, these athletes are given support by monetary and moral means. They are motivated, encouraged, and are provided with a coach (usually teachers who may or may not know anything about the sport- true story). Their progress and development are also recorded and logged. Diet is very important for these athletes too. They follow a strict regimen of a balanced diet and exercise on a daily basis.

From practice to training, Filipino athletes, regardless of age, undergo intense routines. At the same time, the same support is given to them- but greater this time since the competition is international. SEA Games is one example of a competition organization where Filipinos could compete in. Many of the Filipinos who represented the country in the recent Tokyo Olympics were the victors of the SEA Games last November 30 to December 11, 2019, which was also held in the Philippines. Ironically, the host country always has the most number of medals and victors— talk about home-court advantage.

Recently, there were speculations that the athletes who won in the Olympics were not given proper support beforehand- and that the government is reaping their achievements as their own. Hidilyn Diaz, the gold medallist of the Philippines posted 2019 on her story on the social media platform of Instagram with the following words:

(It’s been very hard for me. I need financial support. Do you think that it’s okay? Because I am very ashamed to ask for this but I will still try in order for me to achieve the dream of bringing a gold medal for our country from the Olympics.)

PSC- or the Philippine Sports Commission, in their defense, as gathered by ESPN, said that they did not fail in providing for Hidilyn Diaz. She received a lot of support from the government and the Philippine Air Force where she is also enlisted. A total of 7.5 million were given to Ms. Diaz. 4.5 of it was for her training in China- as she had Chinese coaches and the remaining is for the silver and gold medals she contributed from the 2017 and 2018 Asian Weightlifting games. This was under RA 10699 otherwise known as the Government Incentives act.

Rappler collects that a total of 56.5 million in cash plus special privileges- a lifetime or not- were given to Hidilyn Diaz in the recent Tokyo Olympics Gold Medal event of Women’s Weightlifting.

Onyok Velasco, another Olympiad who brought a silver medal to the Philippines in 2006 from Atlanta, also claims that he did not receive the incentives he was promised. He even wished that the recent Olympiads should not experience the same way he did- and that they would deliver their promises. When this news blew up, Velasco was then recognized and awarded by the current government and was given half a million pesos as compensation.

In the end, Olympics or not, there should always be outstanding support to the athletes here in the Philippines… And you can start now by knowing who they are- whether you are bandwagoning or not.