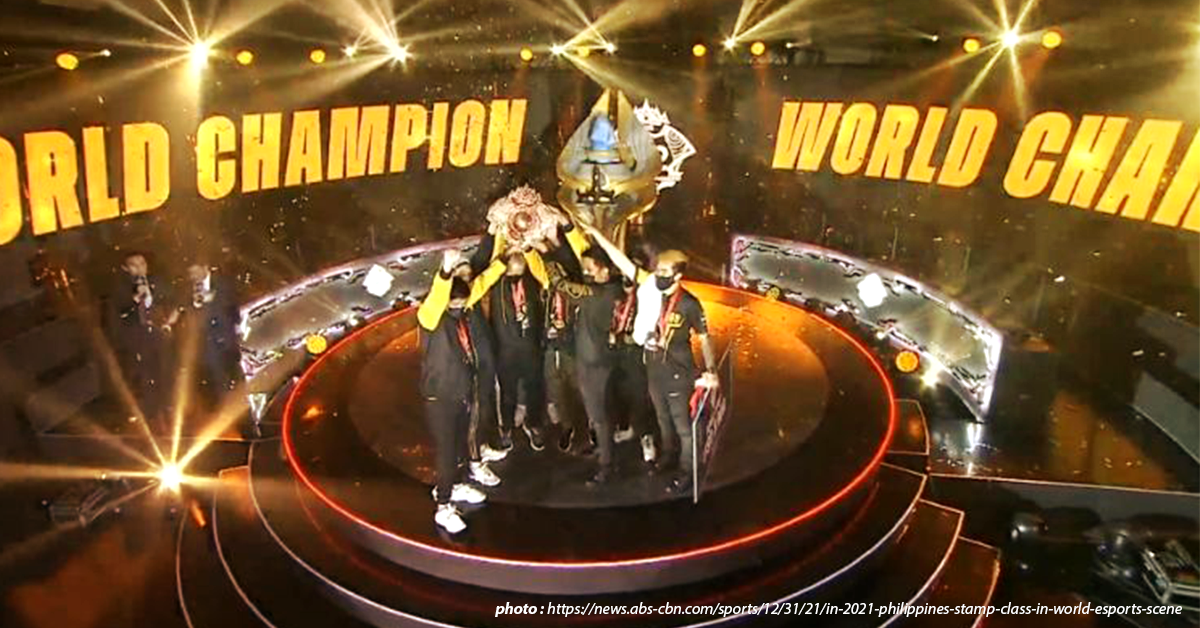 Electronic sports, also called E-sports, have taken the world by storm, with booming sales, audiences, players, streamers, and the list goes on. Due to the COVID-19 pandemic, more people are inclined to spend time inside their houses, with more free time to play and distraction from problems. In addition, the lack of mobility has almost made everyone spend more time on online or offline games, especially in e-sports. It has been expected that the gaming industry will continue to grow over the next few years since almost everyone around the world is going virtual.

There’s nothing more uplifting than supporting our very own countrymen on their journey to success. Everyone was adjusting to a more virtual and online world beginning in the year 2020. As the COVID-19 pandemic continues, the Philippines strives to maximize and meet its online needs. In these trying times, the world of gaming has continuously developed. In the world of e-sports, Filipinos have reigned in two of the most popular games in the world (DOTA: Defense of the Ancients and Mobile Legends: Bang Bang). Despite the raging pandemic, these amazing teams did not waste time sulking around, but instead took the opportunity to grow stronger and practiced intensely to win their E-sports titles as a team. Our first entry, and an example of the annual international e-sports tournament that was presented by Moontoon, is The Mobile Legends: Bang Bang World Championship, wherein teams around the world would face off against each other to achieve the title of the Worldwide Champion for Mobile Legends. The said tournament has been held thrice, and the most recent one was also known as M3 (Mobile Legends: Bang Bang World Championships 2021) that was held on December 6–19, 2021.

BREN Esports and Blacklist International were two professional South East Asian e-sports teams from the Philippines competing for the title of Mobile Legends Championship. In January 2021, BREN Esports won the game and were crowned champions of the MLBB M2 Championship in Singapore against Myanmar’s Burmese Ghouls. Recently, in December, Blacklist International was able to take the crown of the MLBB M3 World Championship, defending the title against ONIC Philippines, for two straight wins in a year.

The next E-sports game on this list is the trending DOTA 2, which has made a huge impact on E-sports gaming in the Philippines. Regardless of some disappointments from missing out on certain games, the Filipino veterans made a significant impact in the world of esports gaming. Despite this, Carlo “Kuku” Palad and Karl “Karl” Baldovino contributed to T1’s South Korean team becoming one of the best DOTA 2 teams in the world in 2021. The ultimate duo admirably carried the team to 7th–8th place and took home the US $1 million winnings.

With all these good news in the gaming world of our country, more Filipinos are now encouraged to enhance their skills and proudly take home some humble awards as more Campus Esports are now being held. Examples of these are interschool competitions that take place everywhere in schools. Increasing number of companies are trying to set up esports competitions to enhance the engagement between colleagues and to introduce the new normal sports.

Lastly, the good news about this is the helping hands of the esports community, especially to those who needed it the most in the midst of pandemics and natural disasters. A lot of E-sports’ families and institutions advocated and held charities for typhoon Odette victims, COVID-19 patients, NGO foundations for children, and many more wonders.