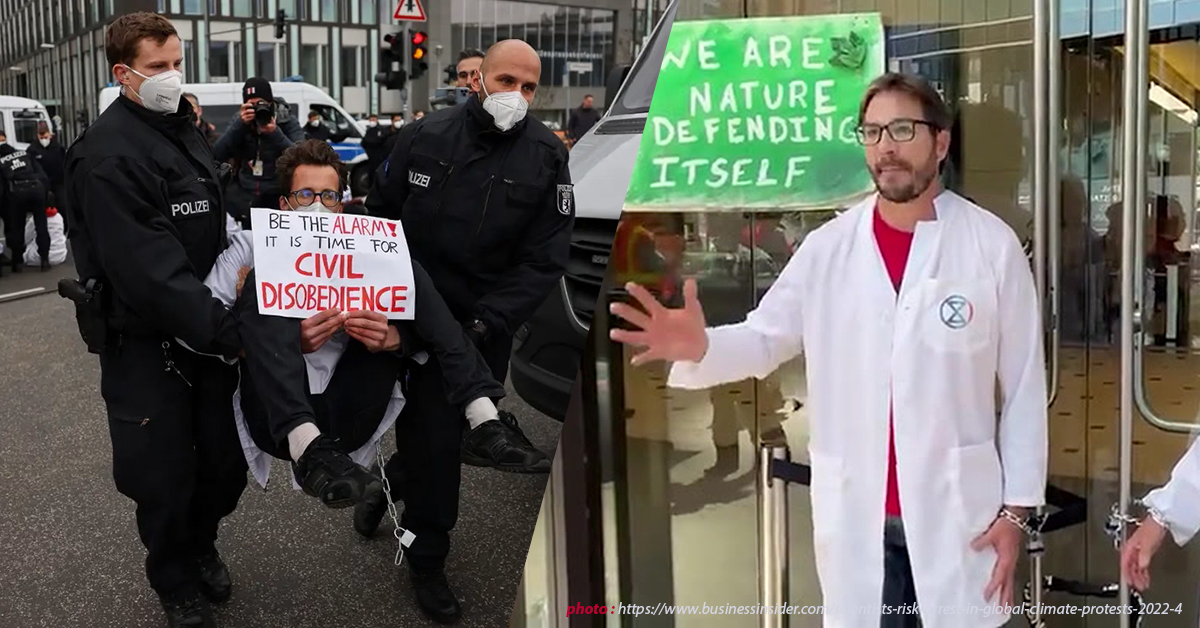 On the 12th of April, 2022, researchers risk arrest in the wake of the ‘Scientist Rebellion.’ More scientists around the world are leaving their laboratories and demanding change in public streets in order to call for greater action to combat global warming. Some are even risking arrest as they chain themselves to banks and other institutions that they believe were not attempting to take the climate crisis seriously enough, according to the activists. As rising greenhouse gas emissions continue to raise sea levels and exacerbate storms, wildfires, and droughts, increasing pressure is being placed on the scientific community to step away from its traditional role as a neutral information provider and take up the torch of activism, according to the World Climate Research Fund.

A group of scientists from more than 25 countries demonstrated last week to insist that world leaders do much more to reduce greenhouse gas emissions. Among those arrested, were a significant number of researchers who had locked themselves to the White House gate and the front door of the JPMorgan Chase bank in Los Angeles, as well as blocking traffic on the I-395 highway in Washington, D.C.

The demonstrations were part of a global movement known as the “Scientist Rebellion,” which is a voluntary association of scientists and researchers from different parts of the world who are attempting to “expose the truth and intense consequences of the climate and ecological crisis by involving in non-violent direct action.”

During in an interview, Peter Kalmus, a NASA climate scientist who was arrested with three others in Los Angeles on April 6, said,

“I personally believe that we have a moral responsibility now to do everything we can to wake up the public.” “It’s very clear that for decades, only residing within the peer-reviewed literature has not worked at all,”

he added. “Scientists are humans, too, and we’re citizens, and we’re parents, and we have a right to express ourselves in this way,” explains the scientist. As soon as he addressed his boys, Kalmus’ voice cracked as he continued, “I’m ready to take a risk for this beautiful world, for my sons.” He added, after taking a minute to cover his face,

“Our warnings about the impending huge disaster have gone unheeded for decades, and we’re still waiting for you to listen to us. The world’s scientists are being disregarded, and this has got to change. We’re not making light of the situation. We are not exaggerating. We’re not exaggerating when we say this.”

They were joined by physicist Greg Spooner, science educator Allan Chornack, and engineer Eric Gill, who were all shackled to the bank’s doors with Kalmus. More than two dozen police officers closed up the road and removed the four demonstrators, who were then taken away in a vehicle, some four hours after the incident began.

The climate scientist was one of seven protesters detained on April 6th (and later released). As explained in a substantial report released last week by the United Nations Intergovernmental Panel on Climate Change, their motivation stems from the serious threat and warning that time is running out to attain the change of the world’s climate goals.

There were more than a thousand scientists from more than twenty-five nations present at the rallies to draw attention to the results of a United Nations Intergovernmental Panel on Climate Change study, which said that mankind had just three years left to reduce greenhouse gas emissions.

How Can We Help As Residents of The Earth?

Solving the climate problems by just changing individual lifestyles and actions may not be enough. According to The Carbon Majors Database, a report published recently by the Carbon Disclosure Project (CDP) that sheds light on the role companies and investors play in combating climate change, only 100 out of the hundreds of thousands of companies in the world have been responsible for 71 percent of global greenhouse gas emissions that have caused global warming since 1998.

Remember that there are more than 100 companies in the world that can contribute to pollution and greenhouse gas emissions. More businesses and companies need to follow a new sustainable system like renewable energy.

Let us do all we can to protect and save as many lives as we can, and to assist our mother earth in healing and recovering from the crises and horrible events that are occurring throughout the world.

We could all make a difference in our own little manner by saving energy, reducing trash, recycling reusable products, cleaning our surroundings, and doing other things. Planting trees is one of the most important factors contributing to the habitability of our planet. They are the primary source of oxygen on the planet, which is required for the existence of all living things on the planet. There is no chance of survival if this does not occur. Aside from the obvious environmental, social, and economic benefits of planting trees, there are several more advantages to doing so. One of the most straightforward ways we can help in the battle against climate change is to delete unsolicited emails, which may come as a surprise to some. Every single email in every single inbox on the planet is saved on a server, according to RESET, a journalistic group that is concerned with the environment. The enormous amount of data necessitates the establishment of massive server farms — massive data centers containing millions of computers that store and transport information. Because these servers run 24 hours a day, they use enormous quantities of electricity and need hundreds of liters of water, or air conditioning systems, to keep them cool. The greater the number of communications we transmit-receive, and store, the greater the number of servers required – resulting in increased energy consumption and carbon emissions.”

Another straightforward approach in which we may assist is via the use of the Ecosia search engine. Ecosia pledges to utilize the advertising income generated by each search to fund the planting of trees, which would be very valuable to the improvement of our environmental situation. More information about the movement and how to use the search engine may be found at the following link: https://www.ecosia.org.

In addition, the United Nations recommends that we should conserve energy at home; avoid riding in or owning cars that run on diesel or gasoline, and reduce our carbon footprint.

If none of these solutions appeal to you, the least you may do is to utilize your platform by giving a stand, promoting education and awareness, volunteering, and signing petitions. Let us unify our efforts to make the world a better place, not just for today and also for future coming generations.