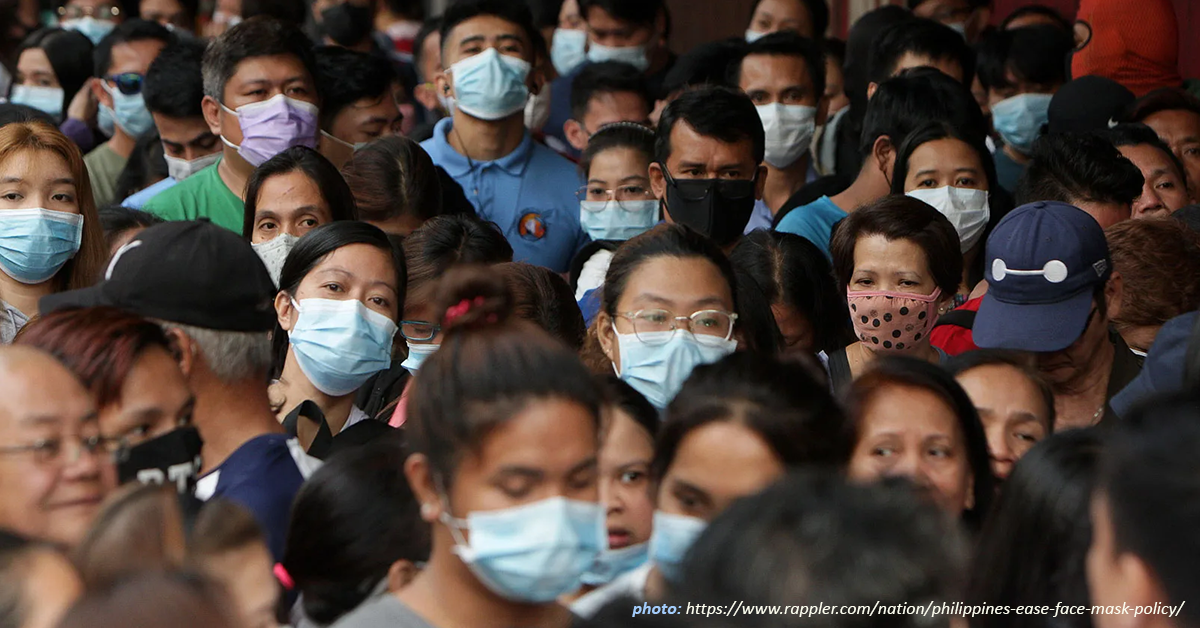 According to the Office of the Press Secretary, as of recently this month, President Ferdinand “Bongbong” Marcos Jr. issued an executive order permitting the voluntary use of face masks in open areas and unpopulated outdoor areas with air circulation. President Marcos verbally agreed to the recommendation and Executive Order (EO) No. 3 was then signed on Monday, September 12. This decision was made with the intent to help further improve the economy and contribute to tourism recovery.

However, the EO still strongly recommends that non-vaccinated people, the elderly, and low-immunity individuals continue to wear facemasks. Face masks are still expected to be worn inside private or public buildings, and on public transportation (on land, air, or water), and in certain outdoor locations. The minimum public health standards (MPHS) guidelines are to be updated by the Department of Health (DOH) with the issuance of the order.

As mentioned in the Philippine News Agency, according to empirical data provided by Tourism Secretary Christina Frasco, other economies across Asia, Europe, and North America have more positive economic conditions, a rise in tourist arrivals, and a faster recovery of their tourism portfolios due strict health protocols being lifted. Thus, the decision to make face masks optional outside was applauded by the Department of Tourism (DOT) stating that this development will speed up the nation’s tourism industry’s recovery from the pandemic.

The DOT is hoping that the Philippines will be able to gradually catch up as the Association of Southeast Asian Nations (ASEAN) region races to restore tourism. Less strict protocols can potentially help promote trust in travel, spur economic activity and enhance social connectivity within and around the country, according to Frasco.

In response to this, Rappler states that leading medical authorities are opposed to loosening the face mask regulation as misinformation about COVID-19 and health protocols will be spread. For instance, people may become less afraid of the virus as they would need to.

As mentioned in Davao Today, even in Davao, some are hesitant about the optional wearing of face masks. Many are worried that COVID is still here, worried for the safety of their children who are now attending school, and worried that people will disregard the danger of the virus. Meg Tan, a vendor whose business is outside a local people school states that “some people are not careful.” The decision for loosening the strict implementation of minimum public health standards has received opposition from certain groups who have had a poor turnout of booster shots and other health sectors.

It was around this time that establishments in the city continued to strictly enforce the mandatory use of facemasks whether indoor or outdoor, especially if the location is confined, according to an article by the Manila Bulletin. According to a spokesperson for the regional task force on coronavirus illness named Dr. Michelle Schlossser said that the risk of infection transmission is much more likely indoors than outside when mask use is discretionary.

Then as continued by Inquirer.Net, after 9 days of the President’s EO, Mayor Sebastian Duterte issued an executive order giving residents the choice to wear or remove their masks in open spaces within Davao City. However, Duterte’s Executive Order No. 43 mandates that minimal public health standards be continuously implemented in Davao. Due to Duterte’s desire to observe how the relaxation of the masking policy would impact the incidence of COVID incidents in other towns and localities that swiftly changed their health procedures, the issue of it was postponed.

The executive order stated that “the voluntary use of face masks in open areas and unpopulated outdoor spaces with proper ventilation is allowed, provided that persons, senior citizens, and immunocompromised persons are strongly recommended to wear their masks and to monitor physical distancing at all times.” Face masks are also still expected to be worn during transportation such as in the President’s EO.

To protect the public against COVID-19 and other contagious diseases, such as monkeypox, the City Health Office previously advised that face mask use indoors be maintained. 516 COVID cases were still active as of September 17 in Davao City, 60% of which had no symptoms and 36% were mild. According to health officials, the city also exceeded its vaccine goal.