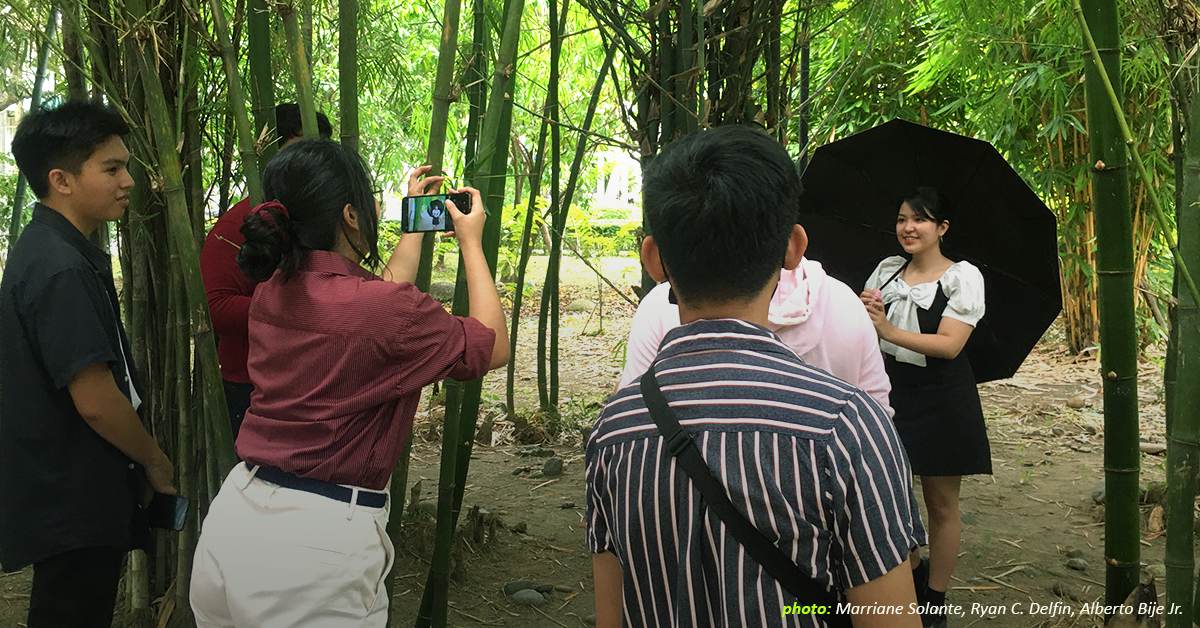 After two long years of waiting for the right time to hold a face-to-face event, AISAT’s Eureka Club has finally managed to find a schedule and go through its plans. Under Eureka is a sub-club called Glitch Photography Club, wherein members are photography enthusiasts. This event was made for them and for the new IDT students to bond with their seniors, learn photography compositions, and enhance their skills with the challenge that was presented. The event was called Paint Me a Picture (PMP). The students were escorted by two photography-enthusiast AISAT teachers, Ryan C. Delfin and Albert Bije Jr.

The rule of PMP is to have a group of four photographers and one model. Each photographer would take five minutes to take their best shot. In the event, eight participants were split into two groups. Two senior students volunteered to be models, Renzy Orias and Mary Joy Saludo. The theme was neutral, wherein the models had to wear neutral-colored clothes to make them stand out in nature. The event took place in Marfori Botanical Park, Davao City, which was filled with greens. The challenge in the event was to find a good spot while also thinking of the composition in just five minutes.

Renzy Orias, one of the models, was interviewed after the event and mentioned that this was her first time being a model for a club event.

“My expectations of the shoot are, well, that the members will experience doing shots using their mobile phones as their cameras,”

she added. She also expected the other members to interact and bond with each other as everyone will be attending the club soon, and she also expected everyone to enjoy the event after being stuck at home for two years due to the pandemic.

When asked about her experience being a model, she admitted that she is not confident in herself and her body. However, she took the chance to be a model to prove to herself that she can become whatever she wants.

“In modeling, it is not just about having a nice body but enjoying the moment to be able to share or convey the mood through photos. “Taba” or “payat,” you are enough. It takes time to build self-esteem in yourself,” she expressed.

The photographer during this event was interviewed as well. When asked if he was able to get the shot he envisioned, he stated that he did, and that the environment was good for taking pictures due to the great lighting as well as the features that he was able to use for taking great photos.

“It encourages me to create a view of the scenery and how the model can show their facial expressions and position they were able to act,” he continued.

The winners of the event were Vhan Ezekiel Diez, Jian Paul Clarito, Hans Mascardo, and Kyle Andrei Clarabal. All four participated and were judged fairly with the photos that they uploaded.