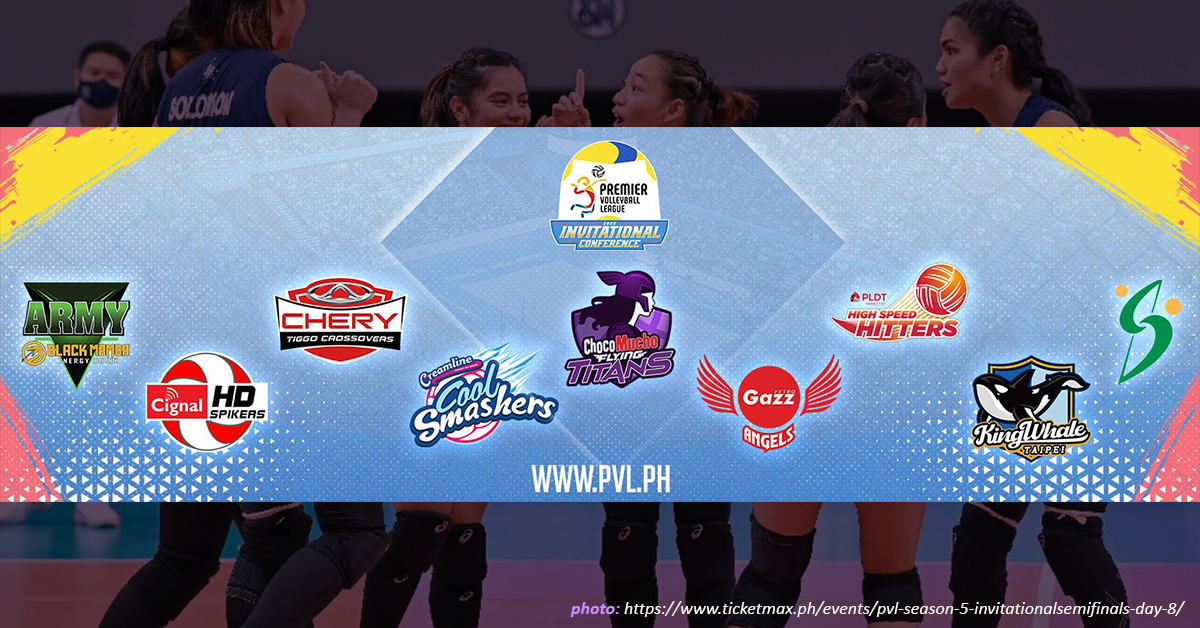 On August 14, 2022, Creamline Cool Smashers triumphed over King Whale Taipei in three straight sets in the Philippine Volleyball League (PVL) 2022 Invitational Conference Season 5. With a final score of 25-21, 25-19, 25-8, the team electrified an estimated 13,000 audiences inside the SM Mall of Asia Arena in Pasay City as they bagged their fifth championship title in the league.

The conference started last July 9, 2022, with seven participating local teams and one international team from Taiwan. The preliminary round consisted of the seven local teams facing each other, resulting in Creamline Cool Smashers, PLDT High-Speed Hitters, Cignal HD Spikers, and Army Black Mamba Lady Trooper, qualifying for the Semi-Finals. The international team, KingWhale Taipei, joined the qualified groups in battling for the championship title by entering the Semi-Finals round. As the league progressed to the finals, Cignal HD Spikers defeated the PLDT High-Speed Hitters, securing the 3rd Runner-up title of the season. Meanwhile, KingWhale Taipei and Creamline Cool Smashers worked their way up to the finals. Thereafter, the latter successfully conquered the international team and showcased how Filipino athletes could keep up with foreign talents. Creamline Cool Smashers, headed by their team captain, Alyssa Valdez, successfully acquired a back-to-back championship from the PVL 2022 League Open Conference held last April. Four of the special individual awards of the league were also awarded to the players from the team. Diana Mae Carlos for the Conference’s Most Valuable Player and Best Opposite Spiker, Celine Elaiza Domingo as the Finals Most Valuable Player award, and 1st Best Outside Spiker for Alyssa Valdez. Alongside them are players from other participating groups who were also recognized for their outstanding performances. Special awards are given to Frances Xinia Molina as 2nd Best Outside Spiker, Mika Reyes and Dell Palomata as the 1st and 2nd Best Middle Blocker, Liao Yi-Jen as Best Setter, and Qiu Shi-Qing as Best Libero.

Apart from celebrating their victorious run, the Creamline Cool Smashers had another reason to celebrate as their achievement secured their spot as the country’s representative in the Asian Volleyball Confederation (AVC) for Women. Hosted in PhilSports Arena in Pasig City, the volleyball community gathered once again as they cheered for the team’s triumph in competing with the other eight international teams from South Korea, Australia, Iran, Chinese Taipei, Vietnam, Thailand, China, and Japan. The roster was composed of fourteen talented women namely Alyssa Valdez, Jia Morado-de Guzman, Jema Galanza, Risa Sato, Diana Mae Carlos, Celine Elaiza Domingo, Jeanette Panaga, Michele Gumabao, Ella de Jesus, Pau Soriano, Kyla Atienza, Fille Cayetano Kyle Negrito, and Rose Vargas together with their head coach, Sherwin Meneses. From the games held on August 21 to 29, Japan’s team brought home the title while the Creamline Cool Smashers ranked sixth in the final standings. While the team’s effort came short for them to enter the final round, it has already been an outstanding achievement to represent the Philippines and host the league. Indeed, the month of August is full of momentous events not just for the players but as well as for the Philippine volleyball community.