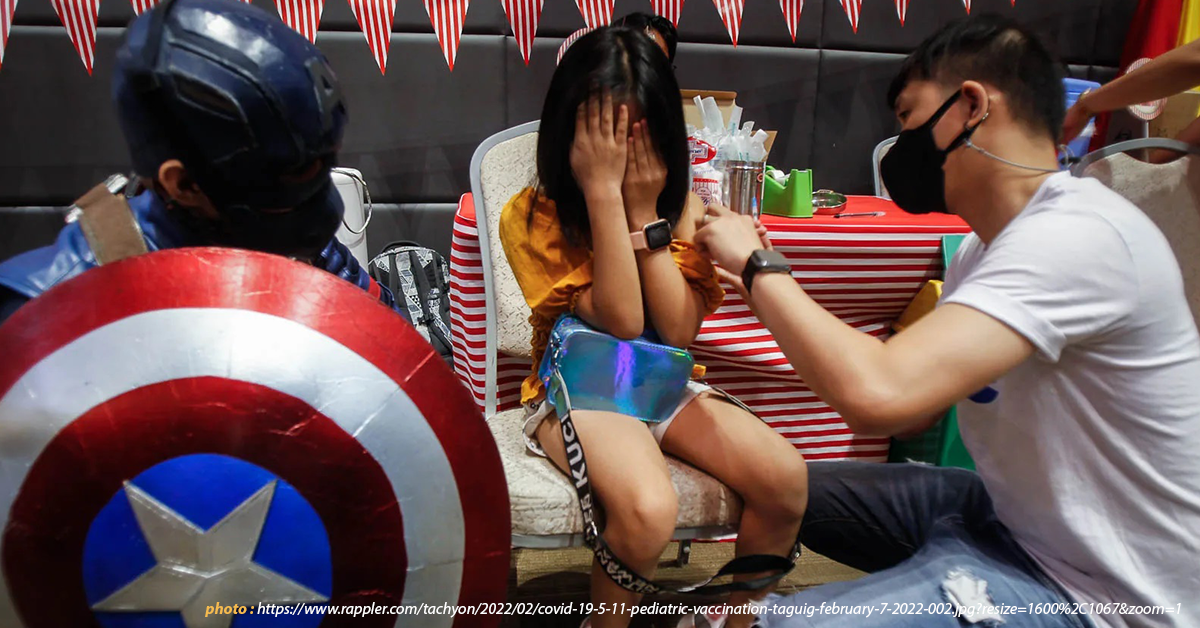 The COVID-19 vaccination for children aged 5 to 11 was supposedly scheduled for February 4, 2022. However, due to logistical challenges, the Department of Health postponed such and moved it to February 7, 2022. The DOH mentioned that the postponement was to make sure that there is enough preparation and distribution of the Pfizer vaccines that have been given emergency use authorization for children aged five to eleven.

As the Department of Education plans to eventually transition to limited face-to-face classes by the academic year 2022-2023, the vaccination of children is good news. Education Undersecretary Nepomuceno Malaluan stated that around 14 million children are eligible for vaccination. This would help build confidence among parents to allow their children to attend face-to-face classes. There were a total of 287 public and private schools that have been approved to conduct a pilot run for limited face-to-face classes since November 15, 2021. However, the government suspended all limited face-to-face classes in Metro Manila and other Alert Level 3 areas due to rising cases since January 2, 2022. The Philippine Pediatric Society and the Pediatric Infectious Disease Society of the Philippines also mentioned that although COVID-19 is causing the less severe disease to the pediatric age group, they can still be infected with the virus, resulting in hospitalization.

Each dose of Pfizer’s vaccine for children aged 5 to 11 is just ten micrograms, one-third of the 30 micrograms dose given to adolescents and adults. Moreover, the vaccine is given in two doses three weeks apart. Also known as pediatric doses, the vaccines come in a new formulation with longer shelf life in pharmacy refrigerators. It is also easier for vaccinators to draw up the smaller doses, and it is highly effective at triggering antibodies in clinical trials with 90% effectiveness at blocking the disease. In terms of side effects, the clinical trial data suggests that children will only experience a few side effects, such as mild to moderate and short-lived fever or redness around the shot area.

Pfizer studied the safety of the pediatric vaccine with around 3,100 children who received the two shots. The Food and Drug Administration (FDA) stated that such a trial was more significant than most studies to license other vaccines for children. The continuous safety monitoring of millions of adolescents who are already fully vaccinated also did not bring up any new safety issues.

Along with Nationwide Vaccination Drive

A nationwide vaccination drive is a follow-up event in response to those affected by Typhoon Odette, which made landfall last December 16, 2021. As several regions still lack access to sufficient vaccines, the nationwide vaccination drive would set up additional vaccination sites in ecozones, industrial parks, and universities. Carlos Dominguez III, Finance Secretary, stated that the Department of Finance had already signed agreements for an additional $800 million in financing for COVID-19 boosters and pediatric vaccines.