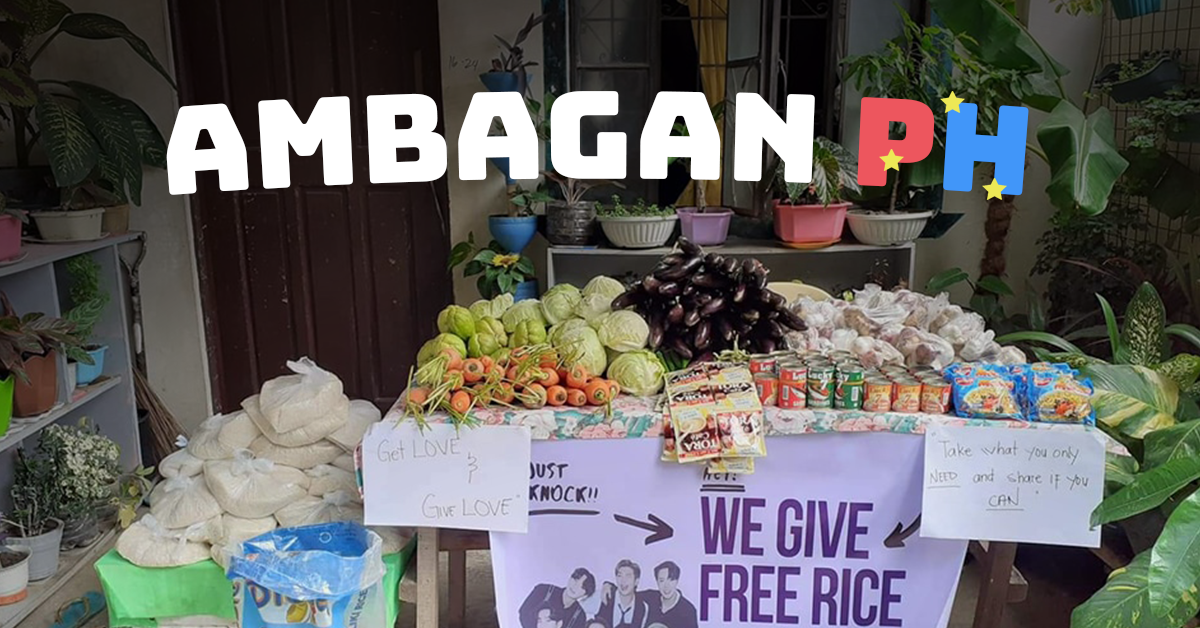 Nowadays, people are in a state of crisis and hardship not just because of the pandemic but also because of the different natural disasters that struck fear and wreaked havoc in people’s lives and properties. It is such a difficult time and people need help. Not everyone has the heart of gold and is open to help others, especially strangers. We can’t force people to do something that is against their will because it won’t end up well. Despite how some Filipinos behave inappropriately and treat others unfairly, Filipinos are also known to be hospitable and charitable. Though not all Filipinos have the heart to help, some are willing to spend their money and share their blessings with their fellow citizens who are in need.

A group called Ambagan PH is a group of volunteers who have the initiative in responding to any crisis or natural disasters to help the victims get through the devastating event that they just had gone through. “Ambagan” which means contribution, is how they were able to do their relief operations. The group was formed by Reyes, Jonathan Caiña, John Rufinel Sagun, Gian Siapo, Nathaniel Camacho, and Rodel Valenzuela Jr. They called their group “Ambagan” because that’s how they were able to share and help victims through contributing what they can and donate them to those in need. The group was created during the start of the pandemic, and they have already helped numerous victims since then.

During the Taal Volcano eruption, they were one of the groups or people who immediately responded and did a relief operation to help the victims. They were also responders of the typhoons Ulysses and Rolly. Though they were also affected by the typhoons, it never stopped them from helping. They have helped a lot of people and places because of their contributions and the urge to help their fellow Filipinos. Ambagan PH also launched a project that helped indigenous students get through their online classes by donating gadgets and laptops. Also, they initiated a donation drive to help homeless people and jeepney drivers, and other individuals who lost their jobs during the pandemic. The group doesn’t just focus on relief operations, but also other ways to assist or help people who are in need, such as, helping micro-entrepreneurs with their loans and even help people who require psycho-social assistance. The group received a lot of praise and support from other people and groups because of their willingness and initiative to provide and assist people who need help.

As for their plans for 2021, they have started the project “Ambagan para sa Kinabukasan”, to support the reconstruction of schools and provide educational materials needed by the students who were gravely affected by the typhoons. They were already able to reconstruct a school building in Quezon and provided the needed materials for education as well. They also initiated the project “Alkansyang Bayan para sa Kalusugan” to help people who require medical services or hospitalization. Especially those who don’t have enough money to avail of such services. The group also created the project “Project Tsuperhero” to provide a livelihood for jeepney drivers who lost their jobs during the lockdown. All of their projects and donations became possible not just because of the support and donations from other groups and individuals, but because of their initiative to help their fellow citizens wholeheartedly.

Every act of kindness, may it be big or small, is already enough to help others. You won’t lose anything once you give, instead, you would gain something from it. Though not everyone understands the principle of giving, to those who know how wonderful it can be, it is such a great pleasure to know that even your small act of kindness was able to help and even save a soul, and give hope to those who’ve lost it. You don’t need to be extravagant just to prove anything because what matters most is that you were able to help in any way that you can. Helping doesn’t just mean donating goods but also assisting people who are in need emotionally and mentally. Helping isn’t just defined as typical as giving out relief goods, it is more on what you can provide to help people with what they need. As a student, would you also do the same? Would you help others too? Though sometimes you receive nothing in return by helping, what’s important is that you were able to restore the hope and peace that those people have lost. There’s no greater pleasure than knowing that your small kindness was able to save people from despair and hopelessness.