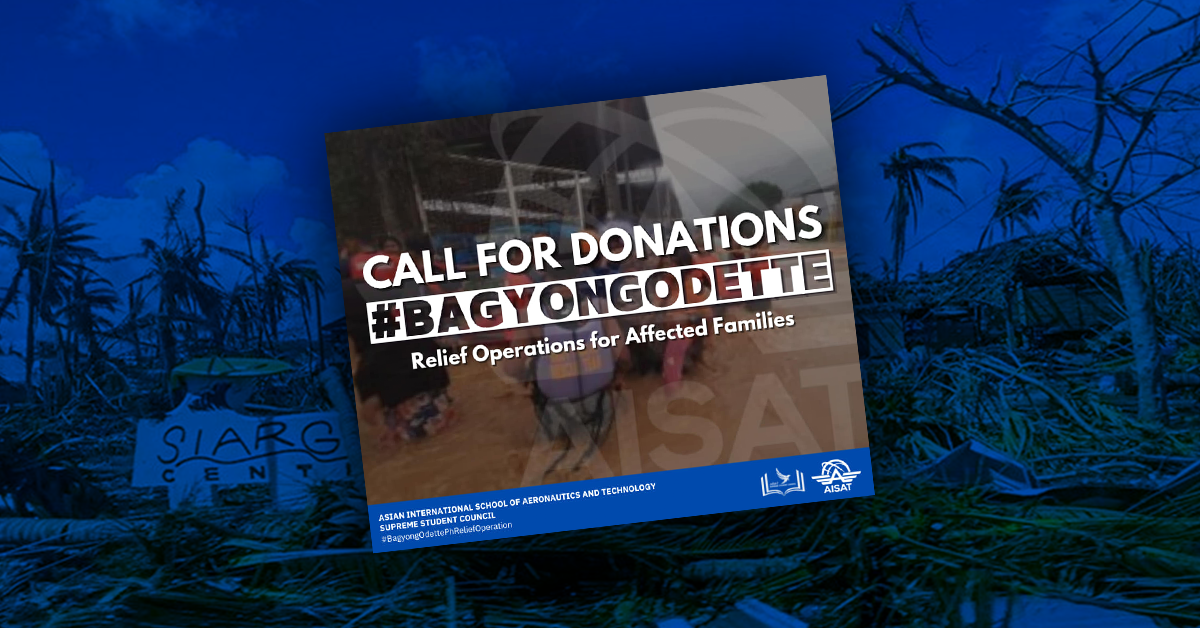 From an article on OCHA Services, on December 14th of 2021, Typhoon Rai (or also known as Odette) entered the Philippine Area of Responsibility, quickly intensifying to a category 5 typhoon with peak winds of 235km/hr. As the strongest typhoon that hit the country in, over 6.2 million individuals have been affected so far across ten regions. Many were in desperate need of supplies like clean water, shelter, medical supplies, hygiene kits, food, and non-food items (NFIs).

On the 18th of December, after the onset of the Super Typhoon, OSA and SSC Adviser Sir Dwight Dave Quiño and SSC officers arranged a donation drive for the victims of the typhoon. He was motivated to create the initiative as it was revealed that the impact of Odette was so large that even one of his friends was affected. With the urgency to help, he requested SSC President James Leonard Bautista to create posters to maximize the reach of collecting monetary donations. In addition, a separate fund-raising activity was conducted by the faculty. The team of SSC officers utilized their social media platforms, group chats, and AISAT page to share their initiative.

Most of the AISAT student community contributed to the donation drive, even those who served as the disseminating force. The #KAISATKasamaMo focused primarily on monetary donations through the different accounts: Gcash, Land Bank of the Philippines, Union Bank, and BDO. The funds were given directly to Sir Jose Lorenzo Iñosa, the AISAT NSRC Moderator. The goods and supplies that were bought and packed include food packs, hygiene kits, and other primary goods. The in-kind donations were channeled through the YMCA AISAT Davao Chapter since logistics were quite difficult. The donation drive was linked to an initiative wherein all collected donations will be sent directly to the Siargao Islands.

The #BAGYONGODETTE donation drive was held from December 18 to December 29 with a total amount of 2,203.00 Php. The amount of money collected may not have been the largest amount of money, but at that time of uncertainty, Sir Quiño says that it is great enough help to them and all transactions were successful. Transparency sheets were made for the documentation of the donations after all. Every person’s help and efforts in different forms gained enough traction amidst the communication problems. With that, the donation drive is considered a success and a big assistance for many of the victims. In addition, similar to the previous efforts of the donation drives from IDT students for the victims of typhoon Rolly and Ulysses, this year another IDT student Eduardo Millondaga opted to create a charity stream with sketch requests in return.

The AISAT community has hosted similar events before and even recently there are different programs that the Student Council have prepared: a webinar focusing on Disaster Preparedness and Awareness, ‘#KnowPreparednessNoDisaster” and the upcoming 2nd wave of Donation Drive. “The message of compassion, the message of love and help in different faces created a huge ripple not only to the Student Council but also to the entire AISAT Community. An AISAT prepared to render help in all forms was attested!” Bautista states.