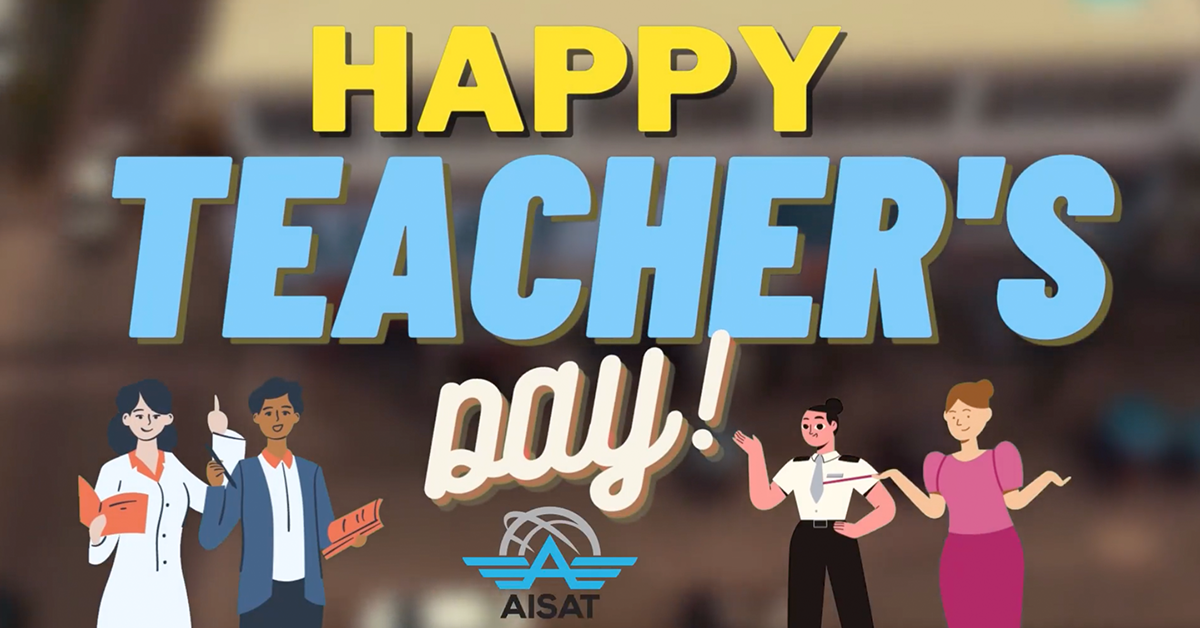 World Teacher’s Day is held annually every October 5th, commemorating the adoption of the 1966 ILO/UNESCO Recommendation concerning the Status of Teachers which serves as a guideline in recognition and concerns regarding the “rights and responsibilities of teachers, and standards for their initial preparation and further education, recruitment, employment, and teaching and learning conditions.” – EN.UNESCO.ORG. Since 1994, World Teacher’s Day has been observed.

Words of appreciation and recognition poured out from the AISAT students, Junior College to College students, and even the graduates, for the teachers was presented. The students displayed their heartfelt messages to their instructors for the guidance, patience, and imparting knowledge even in this time of the pandemic. Students also pointed out some of their instructors who extended their hands not just being an instructor but also showing compassion for the students’ different needs and situations. A video presentation from BS Aviation Management Class 1A with teaching clips of their instructors as the opening of the program is also shown with words of gratitude and clips from their respective classes for each instructor. The program is followed by the messages of the department heads: Mr. Ed Vincent Ybañez – Aviation OIC, Ms. Aubrey Marie Maceda – JC Coordinator, Mrs. Karina Ingrid Therese Rodillas-Kahulugan – HRS and AvM program Head, and Mrs. Leslei Kaye Bernaldez – IDT Program Head respectively. The program heads delivered how the teachers and students deal with the sudden shift in learning when the pandemic hits the country, from face-to-face classes into online learning settings using online platforms such as Schoology which the AISAT used before, and Google Classroom which is being currently used. Adjusting to the new normal was not easy for both sides however, the heads commended the efforts of the students and their determination in continuing learning despite the situation of the COVID-19 pandemic and the new set-up of education. Program heads also motivated and uttered words of inspiration to never give up their goals and dreams whatever the way of life there is.

The event played the AISAT Hymn and the Philippine National Anthem to start. It officially opened with the welcome remarks from Engr. Aida Rosales – Academic Head who greets the AISAT faculty and staff as well as the students who joined the event for giving time and being part of the Tagapaggiyang Hiyas 2021. She also gave insights and drive to the students. An inspirational talk from Atty. Myra Ann Wee-Toe Hio – School President initiating the students to get up and go for their ambitions. She also shared quotations and biblical values that whenever they feel low, seeking God and practicing God’s morals will help their life, their loved ones, as well as to their heart’s content.

An awarding ceremony is held for the teachers who gained majority votes from their students through the voting form regulated before the celebration. Awarding proper was supervised by the SSC President – Mr. James Leonard Bautista. The first award was for the Junior College instructors – Mr. Dwight Dave P. Quiño and Ms. Nerissa Bernas. The next awarding session was for Aviation Management instructors – Mr. Ron Mante and Atty. Myra Ann Wee-Toe Hio. The next one is for the 1st Year instructors – Engr. Kristian Magsalin and Ms. Rogelyn Gato. Awards for the 2nd Year instructors are for – Mr. Earl Vincent Malayao and Mr. Christian Albert Delino. For the 3rd Year instructors – Ms. Debilyn Chua and Mrs. Sheila Mae Aparece were awarded. The next awards go to the 4th Year instructors – Mr. Arbe Jay Polancos and Dr. Gerlieta Ruiz. Last but not the least, Ms. Annah Thalia Cabante and Mr. Ryan Delfin were awarded for the EMC-IDT program. Each awarded instructor gave a small statement conveying “thank you” for the award they received an unexpected reward being given to them.

AISAT students – Mr. Hans Orogo from JC, Ms. Zea Kimbergael Jacutin from AvM, Ms. Erika Barbosa from aviation, and Mr. Eduardo Millondaga from IDT uttered messages to their instructors for being a guide and how thankful they for having instructors who were kind and always helping out, giving lessons, and words of encouragement to keep going in life to reach their dreams. They also expressed their respect and acknowledge their teacher’s endeavor especially in the time of the pandemic. An intermission number by Ms. Vera Suzette Saquian is shown who sang Salamat by Yeng Constantino as her way to express gratitude for the AISAT faculty, especially to those who supported her in making her into who she is today, and Mr. Mel David Calixtion singing Can’t Take My Eyes Off You by Frankie Valli is presented, dedicating to the teachers of AISAT.

Mr. Bautista once again appeared to give digital tokens to the AISAT Employees – a 100-peso worth of Grab voucher each and certificates of recognition from the SSC. Next, video greetings from the freshmen students were displayed saying their admiration to the instructors and reminding them to keep safe. Closing remarks were delivered by Mr. Dwight P. Quiño – SSC Adviser congratulating and saying his cheer to all of the AISAT faculty and staff as well as the students who participated in the event. The meeting was ended by a closing prayer led by Ms. Ashley Anne David – SSC Treasurer. Lastly, a photo op was executed to memorialize the event.

Being a teacher is not only about sharing knowledge, teaching proper skills, or giving instructions; being a teacher means being a second parent to their students, giving hope, showing kindness, and disciplining students just what a parent does, making sure to inspire and encourage them to reach their individual goals, to discover things and believe in themselves.