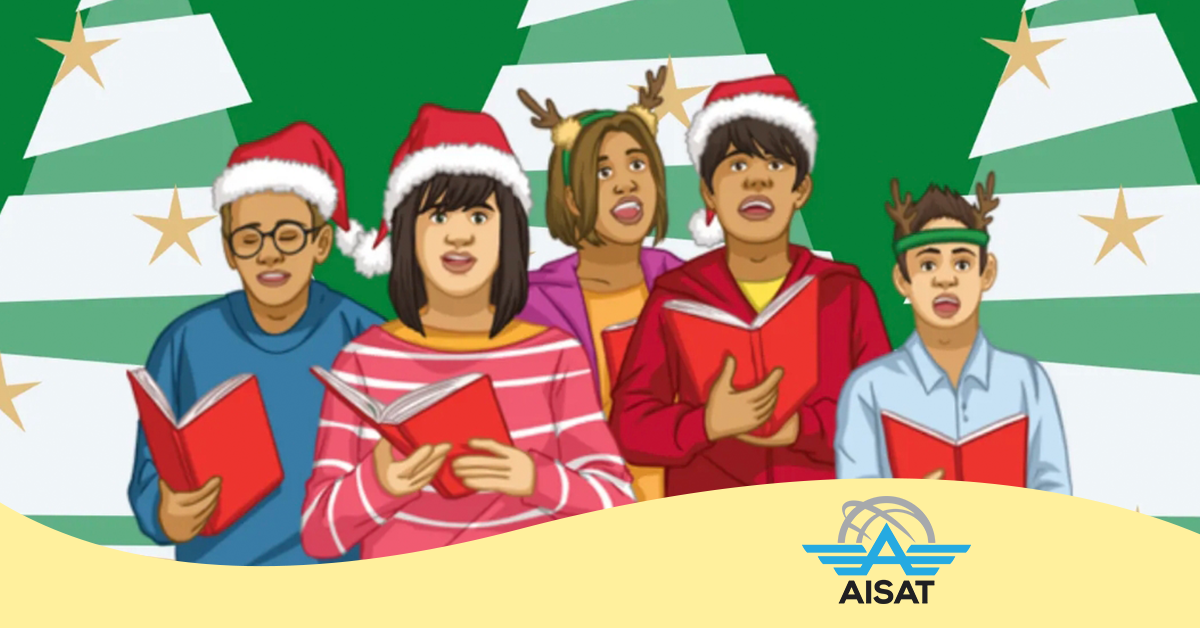 Every December, people are thrilled by the yearly tradition of Christmas related parties. Gatherings, reunions, exchanging gifts, party games, prizes, food feasts, and many more are all of the activities that people do in commemoration of the birth of Jesus. Indeed, the twelfth month of the year is the season of giving, joy and togetherness as Asian International School of Aeronautics and Technology celebrated their own Christmas party with their employees.

On December 20, 2021, AISAT had their version of the said virtual event hosted by Ma’am Kelly Ruth Serenio, from the Gen Ed faculty, with a total of 80 participants. Prior to the day of the event, the faculty and staff are already divided into mixed faculty, aviation, and admin groups. The assigned groupings were used during the various contests and games throughout the program. As the party started, the entries for the Christmas caroling contest were streamed one by one to preview which group would secure the first rank. Each group produced the videos weeks in advance through the hard work, creativity, resourcefulness, and teamwork of each faculty and staff. Upon finishing each entry, everyone got excited about who would land on the 1st, 2nd and 3rd places with P5000, P3000, and P2000 cash prizes. Afterwards, AISAT raffle was commenced by Ma’am Aubrey Marie Maceda, JC Coordinator, through the wheel of names application. The raffle started with the consolation prizes: seven lucky winners for the half sack of kohaku rice, 3 for the industrial stand fan and 2 for the Imarflex 4-in-1 multi-cooker. Indeed, everyone was hoping to be chosen in the raffle because of the extravagant prizes. Once the raffle winners were already announced, Ma’am Mary Grace Silagan, from the Basic Ed faculty, the game master of the event, got the exciting feeling of the participants moving as she introduced the “bring me” game. “Everybody is a winner, walang uuwi na luhaan,” Maam Mary Grace said as she revealed the corresponding cash prizes of P3000, P2000, and P1000. The player representatives of each group were assigned to enter breakout rooms in which the facilitators explained the specific mechanics of the game. For a group to win, players must bring any item with a name that starts with one of the letters of the word “Christmas”. In the end, the aviation group was the first one to finish the task and bagged the winner’s prize. Followed by the game is the final part of the AISAT raffle. This time, the awards were: an extra-large air fryer (3rd prize), 30L electric oven (2nd prize), Fujidenzo washing machine (1st prize), and Fujidenzo hot and cold water dispenser (Grand prize) which Sir Jhonel Albarracin, Sir Ariel De Leon, Sir Dwight Dave Quino, and Ma’am Hazel Joy Barnes won correspondingly. Certainly, the winners were fortunate as the google meeting was filled with “sana all” comments from the other faculty and staff. Afterwards, Ma’am Myra Ann Wee-Toe Hio, the School President, finally announced the winner of the caroling contest, the event’s main highlight. The version of the admin group of “Pasko sa Pinas” became their ticket to pass the championship title. Their lyrics “May tatalo pa ba sa pasko ng AISAT? Ang kaligayan nati’y walang kupas di alintana kung may pandemya” was able to impress the judges with their entry. Nearing the end of the program, Sir Matty Joey Torres, the School Administrator, delivered his closing remarks. He extended his heartfelt thank you to everyone who joined and the people behind the successful event. He even mentioned his hopes of returning to the school’s regular operation and ended his message with, “I am hoping that next time we celebrate our Christmas party in a normal set up“. The event host took a virtual group photo to serve as a memory of the triumphant event to finally end the affair.

The virtual Christmas party ended well as the participants’ smiles and contented mood were evident. The event made the bond of the AISAT employees stronger and closer as Sir Matty said, “This gathering is a strong proof that we have the sentiments of togetherness and love with each other“. Nobody left the google meet empty-handed as everyone was able to have fun, relax and be distressed from all of the academic drawbacks.