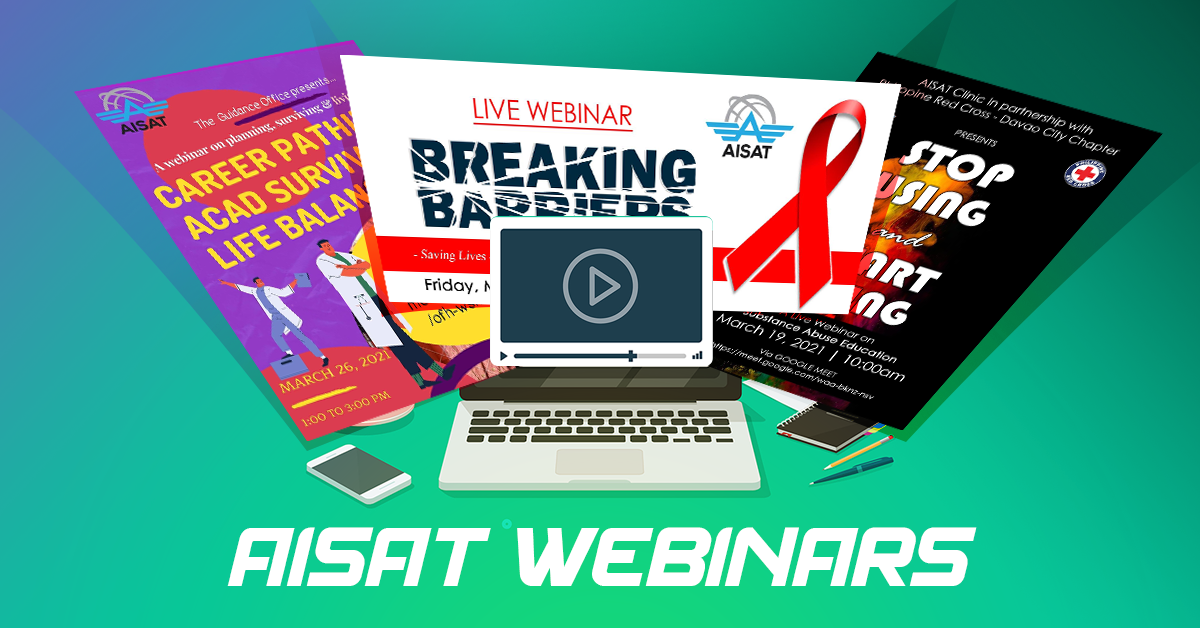 After conducting its first-ever virtual club day last February, some of AISAT’s school clubs commenced their activities for March through a webinar weekend. For this second semester of online class, AISAT’s school clubs also made activities that fit the new normal setting. This webinar weekend happened last March 26 and 27, 2021, via Google Meet amidst the internet connection problems experienced by numerous users during the same week. Also, AISAT Guidance Office, headed by Ma’am Maria Cecilia Santander, student facilitator, scheduled its webinar on career pathing for the afternoon of March 26. However, it was then moved to another date due to connection problems and is now rescheduled to April 23 at 1 PM.

The AISAT Red Cross Youth Club conducted its first activity entitled “Amidst the Pandemic: A Webinar on the New Normal Setting.” After conducting its first club meeting and after seeking approval of its project proposal to the school heads, the activity commenced last March 26 at 10 AM via Google Meet. It was attended by AISAT Red Cross Youth Club officers and members, AISAT administrators, faculty, staff, and students. The webinar aimed to provide participants with practical competencies and transferable skills in response to the evolving health and safety landscape. After the program preliminaries, it proceeded to the talk by its guest speakers – AISAT school nurse and Red Cross Youth Club adviser Ma’am Riz Bianca Nicole Castillo-Bascon, and industry practitioner and AISAT Aviation Management coordinator and instructor Ma’am Katherine Joy Tuling-Benedicto. Specifically, the first guest speaker talked about the current trends and challenges of health and safety globally and locally. In contrast, the second guest speaker presented a talk on the industry employee health and safety processes required in dealing with change and transformation during this new normal setting.

Moreover, after the talk by the two guest speakers, an open forum was facilitated by the host, Mitch Hazel Dandoy, Aviation Management student and AISAT Red Cross Youth Club External Vice President. After which, certificates of appreciation were given to the guest speakers, and certificates of participation were distributed to participants who completed the activity evaluation form. Lastly, an invitation for all AISAT students to join the AISAT Red Cross Youth Club was presented towards the end of the program. For April, AISAT Red Cross Youth Club will be seeking approval from the school heads to be accredited as an official College Youth Council under the Red Cross Davao City Chapter. It will soon be conducting its series of online training for accreditation in May.

The following day, March 27, 2021, at 9 AM, AISAT Research Club – The Mindseekers also conducted its first activity entitled “Research in the Midst of a Pandemic: A Webinar on New Trends in Research Writing During Pandemic Times.” After seeking approval from our school heads and after conducting its first club meeting, the activity commenced via Google Meet. It was open not just to the AISAT community but also to other schools as well. The webinar aimed to demonstrate originality and creativity by proposing potential research directions based on the newest developments at the frontiers of research. The program started with its preliminaries followed by an opening remark by Atty. Myra Ann Wee-Toe Hio, school president. After which, the first guest speaker, Dr. Gerlieta Ruiz, AISAT research head and AISAT Research Club – The Mindseekers adviser gave her talk on the essential considerations in choosing the most appropriate research approach, which was also a re-echo of the research webinar by the Davao Association of Colleges and Universities Network last November 2020. It was then followed by an informative talk by Sir Rudy Lange, an industry practitioner, and AISAT Aviation Management instructor on the elements that shape the new research approaches in the aviation industry.

Furthermore, an open forum was facilitated by the master of ceremony after the talk by both guest speakers. After which, certificates of appreciation were also given to the guest speakers, and certificates of participation were distributed to participants who completed the activity evaluation form. A closing remark was then given by Engr. Aida Rosales, head of academic affairs. Lastly, an invitation for all AISAT students to join the AISAT Research Club was presented towards the end of the program. For April, AISAT Research Club will be conducting its second webinar entitled “Geeking Out: A Webinar on the Benefits of Research (Perspectives from a Student-Researcher and an Academic Professional).” AISAT’s clubs and organizations will continue to post their updates on the AISAT Council of Clubs and Organizations Facebook Page, under the groups’ tab. Join a club or organization now, fellow AISAT students!