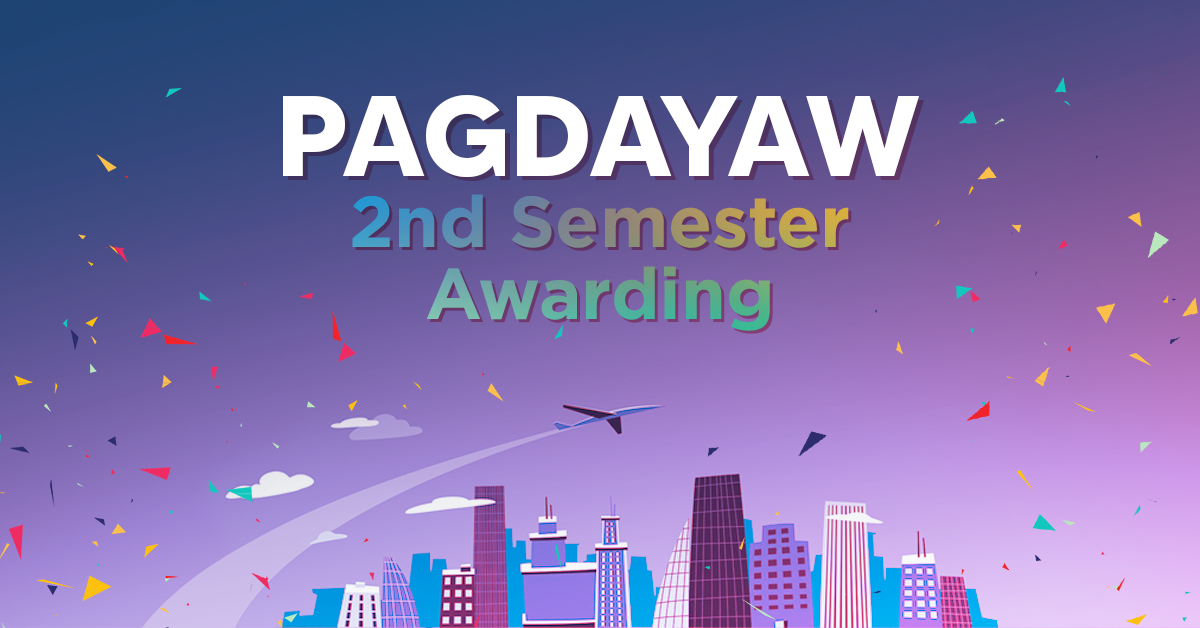 AISAT successfully concluded the academic year 2021-2022 by recognizing the most participative students and most outstanding faculty during its fourth Pagdayaw. The Office of Student Affairs together with the Student Assistants hosted the program held last April 28, 2022, via Google Meet. A recording of the sem-ender celebration will soon be posted through the AISAT Davao Events official Youtube channel https://www.youtube.com/channel/UCAYaLVzBKin098oDyeCDPbg.

After the program preliminaries, an opening remark was given by the School President, Atty. Myra Ann Wee-Toe Hio. Atty. Wee-Toe Hio emphasized the value of involvement and the recognition of efforts amidst the online setting. It was followed by a video presentation of the outstanding faculty nominees during the second semester of the school year 2020-2021. The awarding proper started with a message from the AvM Program Coordinator, Mrs. Karina Ingrid Therese Kahulugan who congratulated the AvM student awardees. She also stated that the awards that the AvM students received are just the beginning of the many more successes to come. To award the most participative students of the AvM Department, Mrs. Kahulugan was once again called to read the certificates of the eight 1st-year AvM and five 2nd-year AvM student awardees. The most participative students of the AvM Department are as follows:

After which, a video message was given by the Aviation Officer-In-Charge, Mr. Ed Vincent Ybañez who congratulated all student and faculty awardees, and stated that we must settle to God the things we cannot control for our God is never wrong and he is sovereign. To award the most participative students of the Aviation Department, Mr. Harvey Jay Cabante, Aviation Instructor was called on behalf of Mr. Ybañez to read the certificates of the twenty-two 1st-year, twenty-two 2nd-year, twelve 3rd-year, and fourteen 4th-year AMT and AET student awardees. The most participative students of the Aviation Department are listed below:

Moving forward, several instructors were also awarded as the most outstanding faculty based on the faculty evaluation done by the students and their respective program heads. The Head of Academic Affairs, Engr. Aida Rosales, and the School President, Atty. Myra Ann Wee-Toe Hio read the respective names, departments, and percentages of the faculty awardees. The following are the most outstanding faculty of the second semester of the academic year 2021-2022:

Towards the end of the program, an announcement regarding the ongoing SSC donation drive was made by the host. The host mentioned that the AISAT SSC is currently conducting a donation drive entitled: Haplos ng Pag-asa para kay Lolo at Lola, an outreach program for the elderly of Davao Veil Geriatric Home Care in Mandug, Davao City. He added that monetary donations can be sent to the SSC President, Mr. James Leonard Bautista via GCash (0956 977 3736) or to the Head of Student Affairs, Mr. Dwight Dave Quiño via UnionBank (1098 1744 7179). Also, for in-kind donations, the drop-off point is at the AISAT building, Sta. Ana Ave. corner Leon Garcia St., Davao City. The host also thanked the virtual audience for their support and presence on behalf of the Office of Student Affairs.

After which, a closing remark was given by the Head of Academic Affairs, Engr. Aida Rosales congratulated all awardees and wished to see everyone face-to-face during the next academic year. To close, the host also invited everyone to the AISAT Campus Ministry sem-ender program together with AISAT’s RevUp campus ministry and the Parables class of the graduating students. The celebration ended with the hope that all succeeding school activities in the coming school years would be conducted in a face-to-face setting.