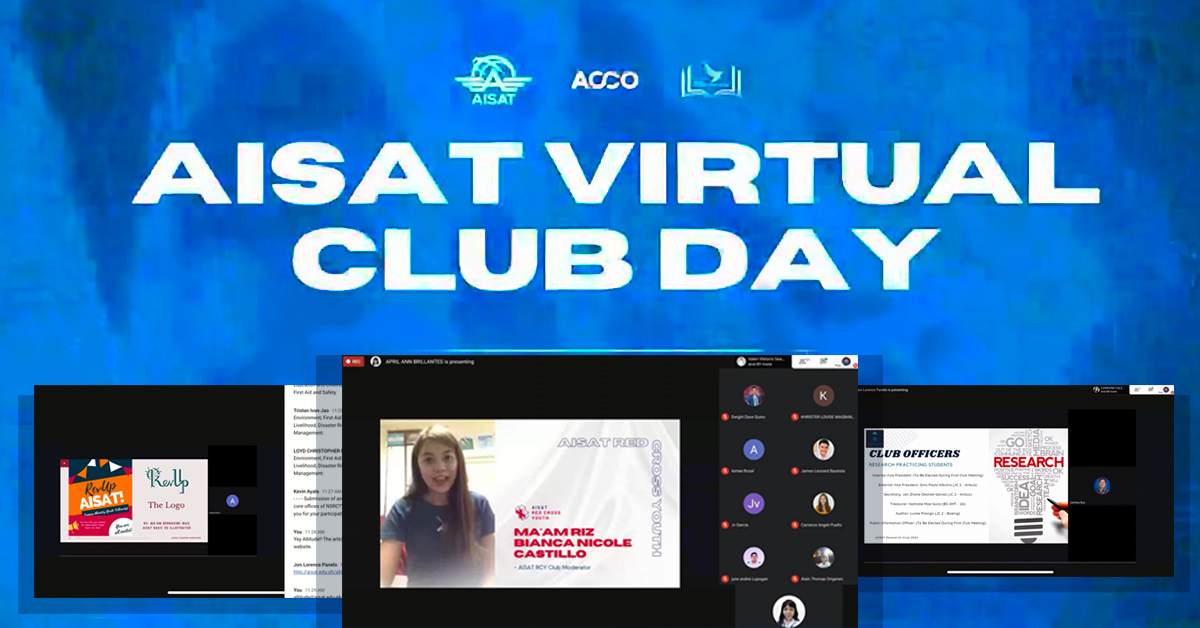 The highlight of AISAT’s 2nd Semester S.Y. 2020-2021, AISAT Virtual Club Day, commenced last February 26, 2021, through Google meet with the theme: Discover, Enhance, Develop. During the previous school year, the Asian International School of Aeronautics and Technology conducted its first club day through a face-to-face interaction among the entire AISAT community at the AISAT gymnasium. This school year, the online class setting caused AISAT to conduct its club day virtually for the first time. The event proper happened on the last Friday of February from 10 AM to 12 NN. AISAT Virtual Club Day was hosted by Sir Dwight Dave Quiño, Head of Student Affairs, and was assisted by the SSC and Student Assistants for the program proper. Atty. Myra Ann Wee Toe-Hio, School President, gave her opening remarks emphasizing the important club officer positions and club goals and objectives. After this, the AISAT Council of Clubs and Organizations was introduced to the entire AISAT community as the primary Facebook page for all announcements regarding the school clubs and organizations.

The first half of the program was for the introduction of the clubs. A video presentation of last year’s club day was first presented on the screen. Simultaneously, since the Google meet was already full, Facebook Live started streaming through the AISAT Davao and Student Council Facebook pages. A question and answer portion was also presented before each club introduced itself. E-Load prizes were distributed to the winners from different programs and year levels. The first club introduced was a new club, the AISAT Red Cross Youth Club, which aims to build a healthy AISAT community through youth participation and health promotion and education towards a more vital AISAT institution. Ma’am Riz Bianca Nicole Castillo-Bascon, AISAT Red Cross Youth Club Moderator and School Nurse, gave her message to invite students to join the club, followed by a club preview video presentation of the proposed activities by Nelson Jules Cabales, AISAT Red Cross Youth Club President.

Moreover, the next club introduced was also a new club. The Flight Simulators Club, whose club adviser, Sir Jetric Aranas, gave his message, followed by a video preview of what the club has to offer AISAT aviators. The next club is a newly merged club of the ARTECH, Glitch Photography, and Cinephiles, now called Eureka, the first expression one says whenever one thinks of a breakthrough idea. Despite having its pioneering members from the Institute of Design and Technology, the club presented in its preview video that its membership is open to all AISAT students. The next club is also a new club that aims to provide aspiring student researchers with the resources necessary to transform their classroom knowledge into professional, scientific experience. AISAT Research Club – The Mindseekers, headed by Dr. Gerlieta Ruiz, its club adviser, and the School Research Head, presented both her preview of what the club plans to provide to aspiring student researchers and a message to invite students through a video presentation.

Furthermore, the next club, the AISAT NSRC, renewed its membership and first presented a message from its club moderator, Sir Jose Lorenzo Iñosa, NSTP Coordinator, followed by a preview that encourages students to join the club and become an NSRC volunteer. The second half of the program introduced the established school organizations that were a part of AISAT for a few years now. The first organization was the official student publication of AISAT, the Altitude, which posted articles on the AISAT website. Sir Arbe Jay Polancos, Altitude Moderator, presented a preview of the 57 published articles online and posted the need for the organization for more writers and contributors who will be compensated. Interested students may send their sample article to altitude@aisat.edu.ph.

The following organization is Horizon, the school’s official yearbook, which presented a video preview of their tasks as the yearbook staff and posted their need for a new layout artist to fill the spot. Interested students may send their application letter, resume, and a sample layout to horizon.aisat@gmail.com. Lastly, AISAT RevUp Campus Ministry is a school organization that does not require a membership but is open to the entire AISAT community. RevUp aligns with AISAT’s vision and mission to provide quality education and save more souls. RevUp conducts its weekly sessions every Wednesday at 3 PM and is currently tackling the parables series. RevUp also sends out email invitations and pre-registration forms to all AISAT students.