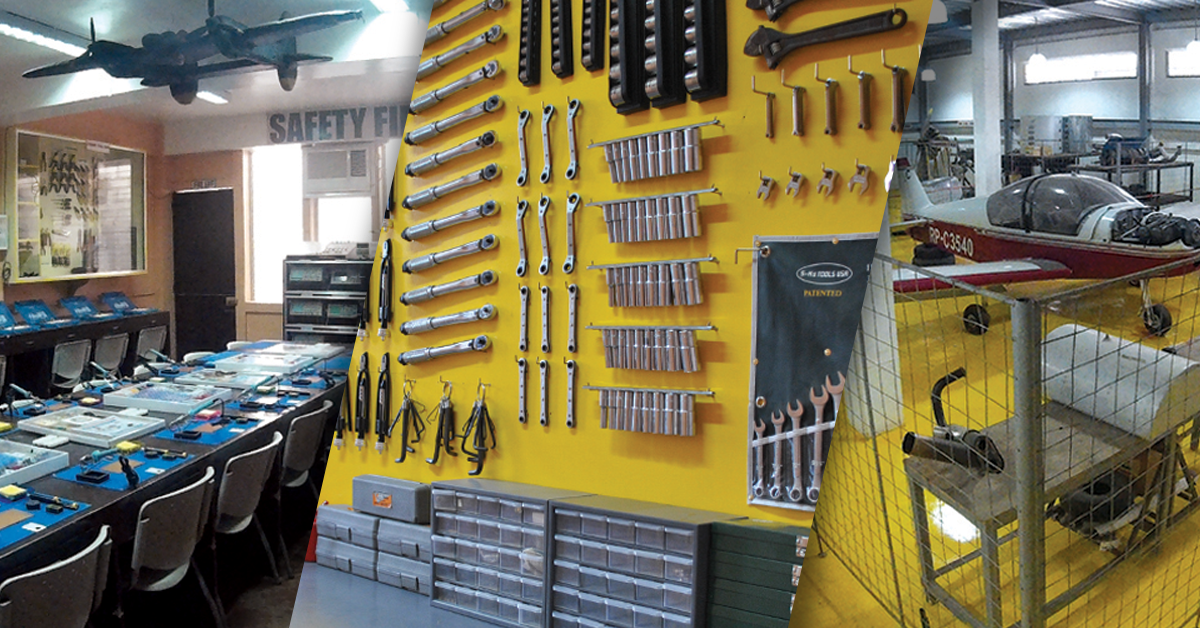 TWO college courses, the BS Aircraft Maintenance Technology and BS Aviation Electronics Technology of the Asian International School of Aeronautics and Technology are expected to return in limited operation in the next semester.

After the “go” signal released from the Commission on Higher Education for all courses last November 11, 2021, in line with the expansion of limited face-to-face classes to other degree programs that require hands-on experience in higher education institutions (HEIs), AISAT immediately assembled a conference last November 14, 2021, to both inform the entire community of what plans are to be pursued , and solicit reactions and suggestions from the body to refine the schemes of the in-person laboratory sessions.

At the conference, Atty. Myra Ann Wee Toe-Hio, AISAT School President, presented the two courses which were allowed to conduct limited laboratory sessions in the institution – the BSAMT and BSAET. She stressed that the traditional setup for class discussions is not yet to be materialized as only laboratory sessions will only be allowed. The graduating batch are selected to have their laboratory sessions, practical assessments first in compliance with the requirements of the Civil Aviation Authority of the Philippines (CAAP) as they will be getting their licenses/ S.O applications which require them to have their laboratory units completed. Atty. Toe-Hio clarified that the rules set by the CAAP were different from CHED as the two governing bodies have a contrasting directive for graduates: CAAP requires laboratory sessions completed to release Special Order (SO) application for graduates, while CHED allow graduates to finish their degree even without such. Thus, AISAT, as per Atty. Toe-Hio, must align the sequence of the in-person sessions according to the directives of CAAP given the limited number of students to conduct in-site sessions.

Retrofitted facilities with modifications as mandated by CHED were then highlighted by Mr. Matty Joey Torres, AISAT School administrator. The rigid modification of facilities to be utilized for the practical parts of training and hands-on laboratory session for the aviation courses was highlighted as the institution have now rolled out its plans for the deliberate revert of classes after almost two years of distance learning. The physical facilities, as per Mr. Torres, were aligned according to the instructions and standards that are given by the CHED in line with the rules of the Inter-Agency Task Force (IATF) to which the mechanisms are to be put in place. Limited Health Protocols (checking of temperature, sanitation, pre-entry evaluation, etc.) are to be implemented to trim the chances of spreading or contracting the virus on the facilities. Markings were also placed on the entire parameter of the institution. Specified isolation area was also included in case of an individual displaying any symptom and for treatments purposes, he added. A Waiting Area is intended for students to not flock and to maintain the system being implemented on the parameters of AISAT particularly social distancing and limited movement. Laboratories were retrofitted to satisfy the demands and needs of the students while aligning with the standards. Plastic barriers and area markers are being positioned to limit the interaction of the students while bringing optimal quality on outputs as working stations are being well-maximized for the entire session, Mr. Torres emphasized. The number of students allowed to conduct in-person laboratory sessions was also discussed as required by the CHED in regards to the area of institution: Aviation Lab 1A, Aviation Lab 1B, Airframe Lab, Painting Area, and the Welding Shop are expected to hold eight (8) students per session with a daily session of two (Morning and Afternoon Session), while the Avionics Lab which was set to six (6) as its maximum capacity for both the morning and afternoon sessions, with such number of students lead to a total number of seventy-six (76) for the two sessions in a day.

Laboratory fees is announced by Atty. Toe-Hio that such will be charged amounting to 1000 pesos, but not the entire laboratory session. She also added that the charging of fees will cover only the activity to be performed. The idea of having two sessions, on the other hand, was suggested by the CHED to reduce the contact of students during the lunch period. A sign-up sheet to be dispersed according to each year levels with graduating students as the first to fill in the intended slot. The intended slots will have all required laboratory sessions covered with the online classes still applied, she clarified. Measures in conducting sessions per year level were also tackled wherein CAAP’s mandate is to be applied with a 4-5 weeks duration as per the restructured laboratory sessions required to complete the course. She also encouraged that all students should get vaccinated during the conference. Proper dress code for laboratory sessions was also expounded: lab shirts and Personal Protective Equipment (PPEs) were stressed together with the alternatives was shared during the open forum session.

The On-the-Job Training was also explained as not yet being implemented due to the restricting regulations still in effect. With regards to the licensure of graduates, the system to be adapted was highlighted on how the mechanism works: after concluding the required laboratory sessions of the graduating students, she reiterated that the institution will be filing the SO application to the CAAP and have the said evaluating body to conduct practical exams and the licensure examination proper for ease and convenience of the students. The conference was wrapped up with a battling thrill and joy for graduating students as the possible in-person graduation ceremony for batch 2021-2022 was unsheathed.