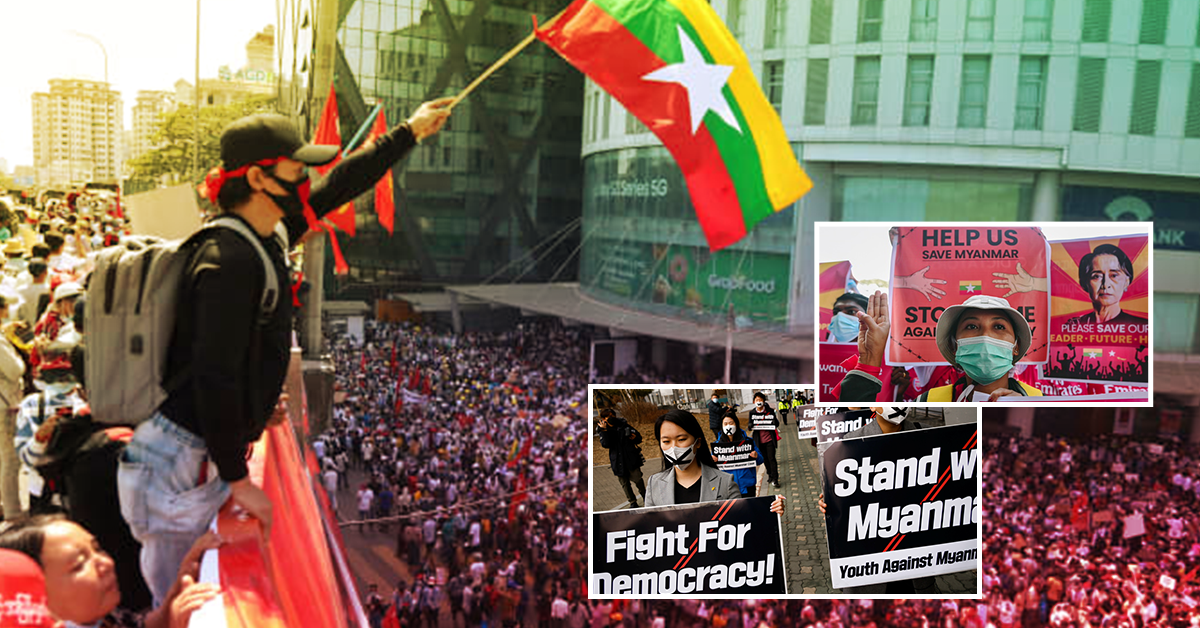 A huge number of individuals protested and rioted in the significant urban communities in Myanmar on February 6, 2021, challenging the military coup in the midst of the rising worry of viciousness in the Southeast Asian country. The military held onto power on February 1 and came after dissidents encouraged individuals to turn out as a group and break the military’s claims that the public supported its choice to hold onto power from regular citizen pioneer Aung San Suu Kyi and her National League for Democracy (NLD). The military had upheld the resistance, who was requesting a rerun of the vote, guaranteeing broad misrepresentation. The political decision commission said there was no proof to help these claims. The coup occurred as another meeting of parliament was set to open. Ms. Suu Kyi, who is under house arrest, has been accused of having illicit walkie-talkies and abusing the country’s Natural Disaster Law. Numerous other NLD authorities have additionally been kept.

Ms. Aung San Suu Kyi got world-famous during the 1990s for battling to re-establish democracy. She was granted the Nobel Peace Prize in 1991 while under house arrest. In 2015, she drove the NLD to triumph in Myanmar’s first openly challenged political decision in 25 years.  Now, the one who is in charged is the Military Commander-in-Chief, Mr. Min Aung Hlaing. He has a remarkable political impact, effectively keeping up the force of the Tatmadaw – Myanmar’s military even as the nation moved towards democracy. He has gotten global judgment and approvals for his supposed job in the military’s assaults on ethnic minorities. In his first open remarks after the coup, General Hlaing tried to legitimize the takeover. He said the military was on individuals and would shape a form of “true and disciplined democracy”. The military says it will hold a “free and reasonable” political decision once the state of emergency is finished.

Due to what happened, the fights over the coup have been the biggest since the alleged Saffron Revolution in 2007 when a huge number of monks ascended against the military system.  Many protesters incorporate educators, attorneys, understudies, bank officials, and government laborers. The military has forced limitations, including curfews and a restriction in a mass gathering. Security powers have utilized water guns, elastic bullets, and live ammo to attempt to scatter the protesters. Also, a lot of pictures and videos were over the news and other social media were posted by Myanmar people to gain support and justice. There are many witty and creative slogans in protesting and showing their opinions in protest and that gained attention to people over the internet.

The situation of Myanmar gained support from the world in which various nations have censured the military takeover. UN Secretary-General António Guterres said it was a “serious blow to democratic reforms”. The US and UK have reacted with sanctions on military authorities. On the other hand, China obstructed a UN Security Council articulation denouncing the coup. Beijing, which has recently contradicted worldwide intervention in Myanmar, encouraged all sides to “settle differences”. While, Cambodia, Thailand, and the Philippines, have said it is an “internal matter”.

A huge number of people marched to a few territories in Myanmar to request the freedom of detained and elected leader Ms. Aung San Suu Kyi, which among them a Filipino. EJ, not his genuine name, an occupant of Myanmar for around three years now, said he joined the dissent in fortitude with other Myanmar inhabitants requesting that military chiefs “respect of their vote” and released their ousted political leader, Nobel Peace laureate, and Myanmar President Aung San Suu Kyi.

The Philippines refuses to interfere, and calls the Myanmar coup an “internal matter”. Duterte’s spokesman Harry Roque during a press briefing said:

The main concern of the Philippine government is the safety of Filipinos right now in Myanmar, promising that the consulate will help nationals there and will give them insurance and impermanent shelter if necessary.