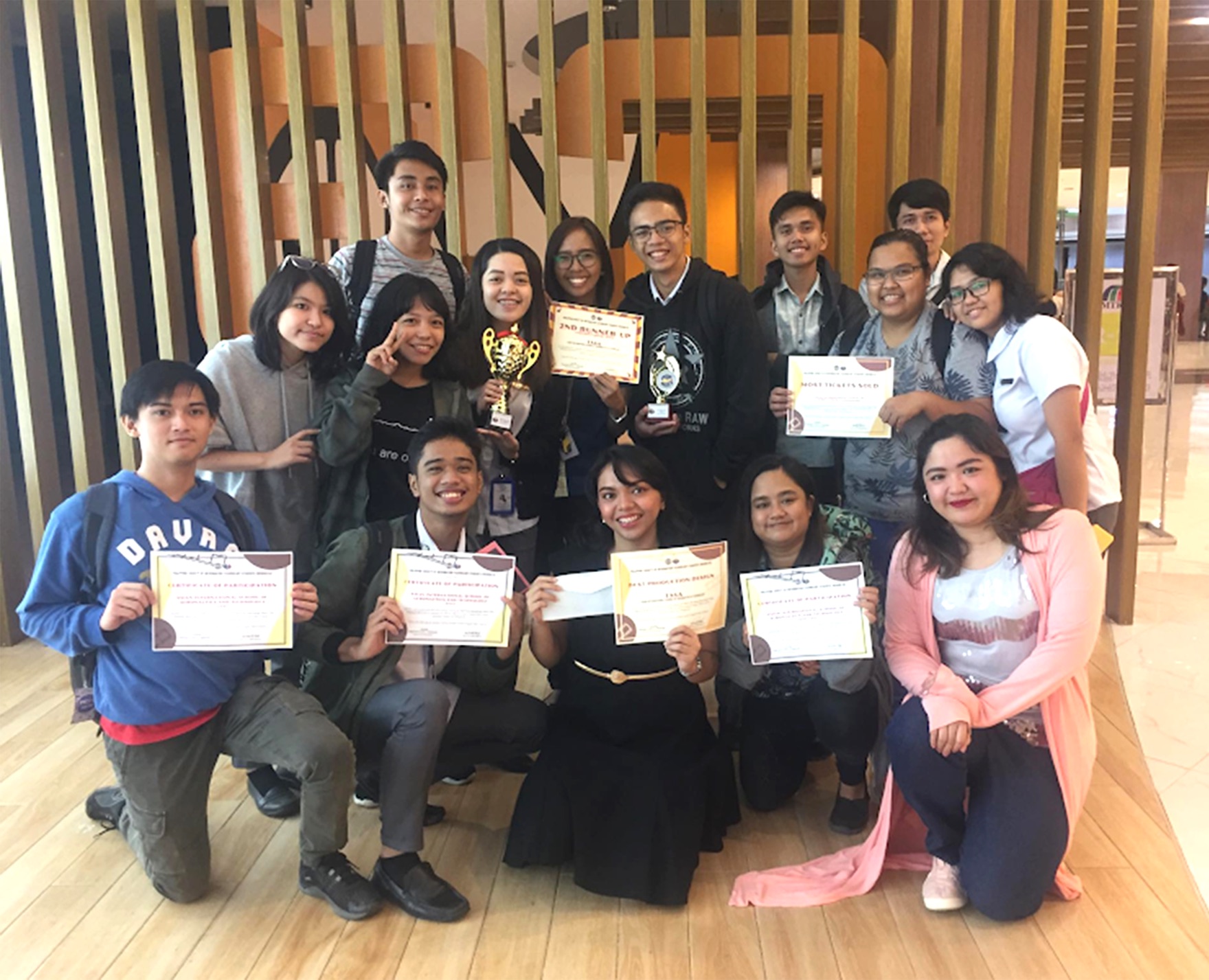 2020 came in with so much surprises for  AISAT’s IDT Department as it received awards in different competitions!

AISAT’s very first time entering the PSITS Film Festival was a remarkable step for one of the entries in the Drama genre, PERO AKO, who featured John Kenneth Gonzaga and was directed and edited by Roquen Kirk Coscos along with scriptwriters Mary Joy B. Saludo and Eduardo Millondaga, was nominated for Best Production Design. Also, it was nominated for Best Supporting Actor/s including Eduardo Millondaga, Roquen Kirk Coscos, Marriane Solante, Deneil Jadraque, Fionah Jean Tan, Mary Ann Bete,Paolo Deseo, and El Roi Amadeo Quir. As detail matters, the faculty members, Sir. Arbe Jay Sumangue Polancos and Ma’am Kelly Ruth Serenio played cameo roles in the said drama. Another entry from the Animation Genre titled LOST that featured a ghost girl who found herself in the home of an old lady that was directed by April Ann Brillantes and edited by Nimrod Julius Llorente. It was proudly animated by our very own talented students: June Masocol, who helped with the concept and Rayu Rafuli, who created the backgrounds and designs. In addition, there was extra animating help from Iris Aaliyah Baldado Layague and Sean Cartegena. The music used in the film was created by Miko Aligato, April Ann Brillantes, and Nimrod Julius Llorente.

Under the Suspense Genre, AISAT IDT Department’s entry titled TAGA,  received most of the attention with the nominations of Best Director, Best Actress (Renzy Orias), Best in Cinematography, Best in Musical Scoring, Best Production Design, Best Editing, Best in Genre, Best Visual Effects, Best Trailer, and Best Poster. Directed by Thea Estraza and edited by Marc Steven Vegafria, it followed the story of a girl who struggled with sleep and nightmares. The mysterious creature was played by Eduardo Millondaga who sure gave the crowd a scare. The movie was assisted by Mary Joy B. Saludo and John Kenneth Gonzaga (from the Drama genre) who took charge of the special effects makeup, and Roquen Kirk Coscos who helped film several scenes.It was definitely a challenging film to create as animation took a serious amount of time even if the students were given only a month for production. Through their skills and determination, they accomplished to finish the film and it even received a nomination for Best Visual Effects.

Out of all the nominations, the film won the Best Production Design award. And out of all 11 entries, it ended up winning the 2nd runner up with 2 trophies.

These were all possible through the help of AISAT’s faculty and staff especially  to Atty. Myra Ann Wee-toe Hio, Ms. Kaye Lodia, and Ms. Kelly Ruth Serenio who encouraged the students to participate in the event. It was definitely a challenge to create 3 film entries for only a month since the IDT department is known to have small student population. Students experienced numerous days of going home late and many nights without sleep, but they did it anyway! They may not have won all the awards but it was definitely an experience worth learning from with the willingness to participate again next year.

Participants received so much support from other AISAT students including those from the senior high school department and the AISAT SQUADRON. With all this support and love, the students were able to receive the title of the Most Tickets Sold!

The final challenge: Last February 11, 2020, Asian International School of Aeronautics and Technology (AISAT) joined the annual PSITE – IT Olympiad that was held at the Ateneo de Davao University. For weeks, the chosen representatives of our school have prepared and trained with their coaches for their respective events. Their calendars were marked and the day of the competition grew closer and closer. When the day finally arrived, the IDT  students were brimming with excitement and a bit of trepidation.

Three note-worthy events for the competing schools were participated in—  First was the IT Quiz Bowl, The Motion Graphics Competition, For the first event, our representatives, Roquen Kirk Coscos and Gem Joy Catedrilla with their  lovely coach Ms. Annah Thalia Cabante, poured over the increasingly difficult questions with their all. Though they didn’t come home with medals that day, they came home with the burning resolve to bring in the first place medals the next year. Next, The Motion Graphics Competition was represented by Sir Ryan Delfin as the coach and Jude Ionn Magalan as his promising prodigy. Jude showcased his skills with the video editing program Aftereffects and created an entertaining motion graphic aimed to inform us more about the ever relevant but hazardous phenomena of the Novel Corona Virus outbreak. Lastly, the Digital Drawing event was spearheaded by Sir Freddie Rodriquez Jr.’s team consisting of Raymond Jay Rofuli and Thea Estraza. With the given theme of “Culture Mash-Up: PH Tribes + Modern Soldier”, the two showcased their talent in character designing against their formidable fellow contestants. The two participants were able to finish in under the two hour mark that was given for the task, both satisfied with their creations.

Later that afternoon, our very own Ms. AISAT 2019, Mary Joy Saludo, tested her prowess in Infographics with her partner, Marc Steven Vegafria. Their skillful coach, Ms. Leslei Kaye Lodia, was their best supporter as they toughed out through their time limit to create a unique and informative design that also teaches us about the Novel Corona Virus outbreak and all of the things that we should know about it in relevance to our health and safety.

The day ended with all smiles for our group of students and teachers as the closing and awarding program commenced. We even got a rather entertaining bit from our Ms. AISAT as she gave the crowd a little tease of her talent as a singer and dancer.

The awarding of winners that was truly the highlight of the  day. The AISAT IDT Department came home with three medals to be proud of. Proving once more that she’s both beauty and brains, Mary Joy Saludo snagged the 3rd Place in the Infographics event. In the Digital Drawing event, the students surprised us with not just one but two medals! Raymond Jay Rofuli earned the 3rd Place with his amazingly rendered digital art piece while Thea Estraza was named the Champion for her tribal soldier character design. All the unexpected surprises and the splendid performances of all participants of our school truly seized the day and made them come out on top.

Indeed, they showed us the promising future of their department and of course, their beloved AISAT, where dreams really does take flight.